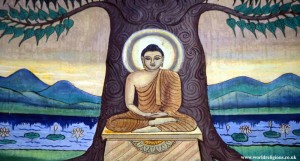 Buddhists are not required to worship in temples, but many do so in order to meditate on the Four Noble Truths, the essence of Buddha’s teachings. Meditation itself is a central practice in Buddhism which today counts some 500 million followers. Mainly in Asia but increasingly so in western countries. Those Buddhists who can, undertake a pilgrimage to the holy places associated with the Buddha’s life. Stupas to accommodate any sacred relics are common. Pilgrims walk around these bell-shaped structures by way of paying their respects and to turn prayer wheels containing Buddhist texts. The most important sites revered by all branches of Buddhism are: Lumbini  birthplace), Bodghaya (enlightenment) Sarnath (where Buddha gave his first sermon) and Kusinara (where he died). 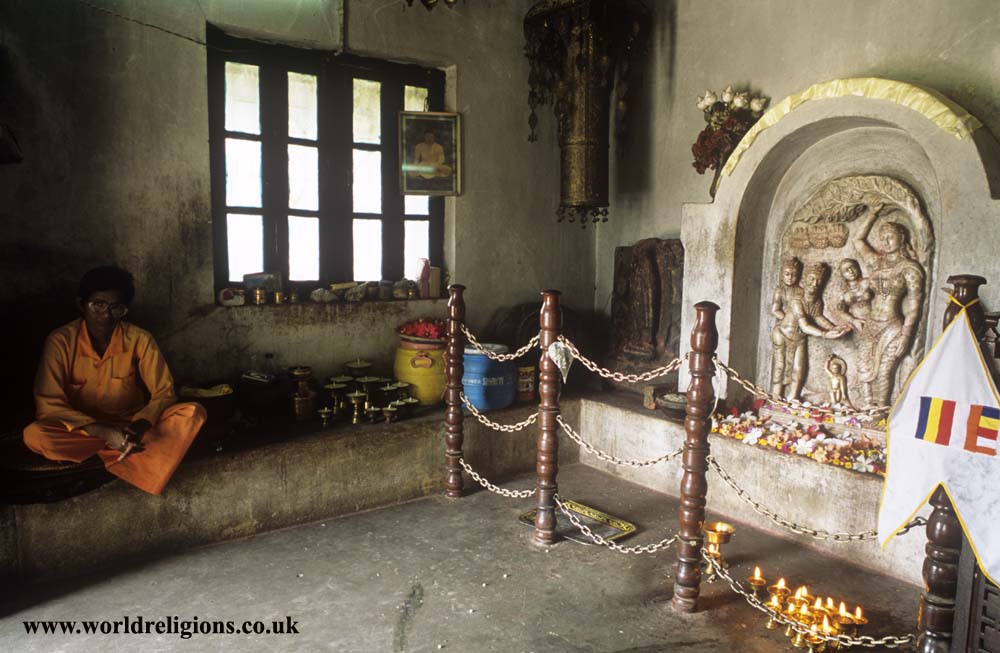 Siddhartha Gautama, who was given the honorific title of  Lord Buddha (literally meaning the awakened one) was born in 623 BCE in Lumbini in what is now southern Nepal. This is verified by an inscription on a pillar erected by the Mauryan Emperor Ashoka, an early convert to Buddhism in the third century. The Lumbini monuments were placed on the UNESCO World Heritage List in 1997. 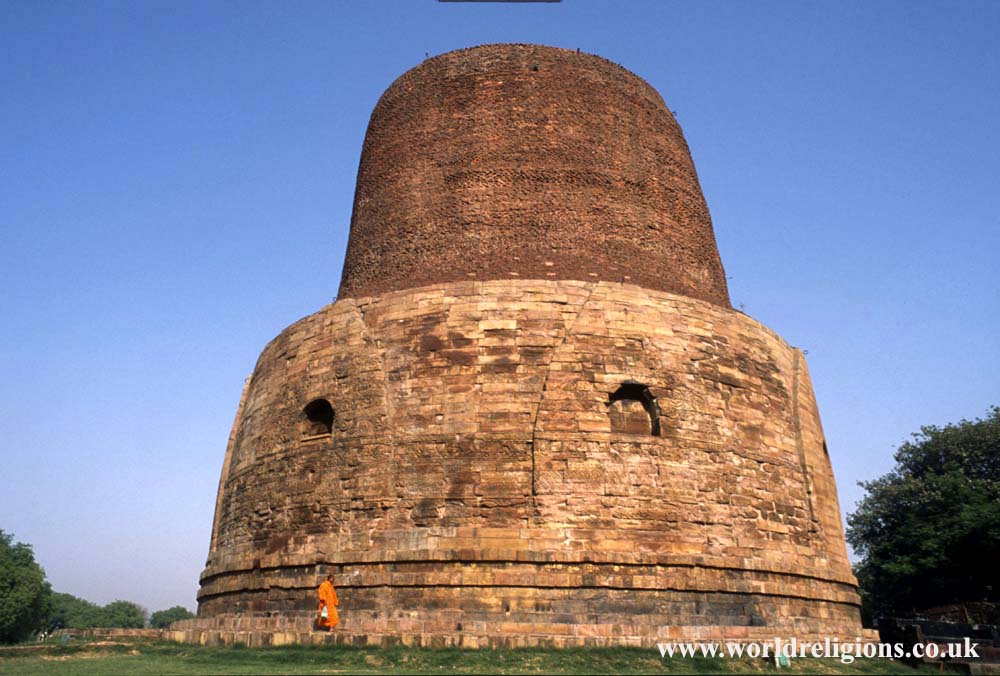 The Dhamekh Stupa, built in 200 BCE, is located in Sarnath, 12 kms from the Hindu city of Varanasi in the Indian state of Uttar Pradesh. It marks the place where Buddha delivered his first discourse on the noble Eightfold Path to enlightenment. Sarnath is one of the four holy sites in India sanctioned by the Buddha himself for pilgrimage. Pictured is a pilgrim circumambulating the lofty structure. 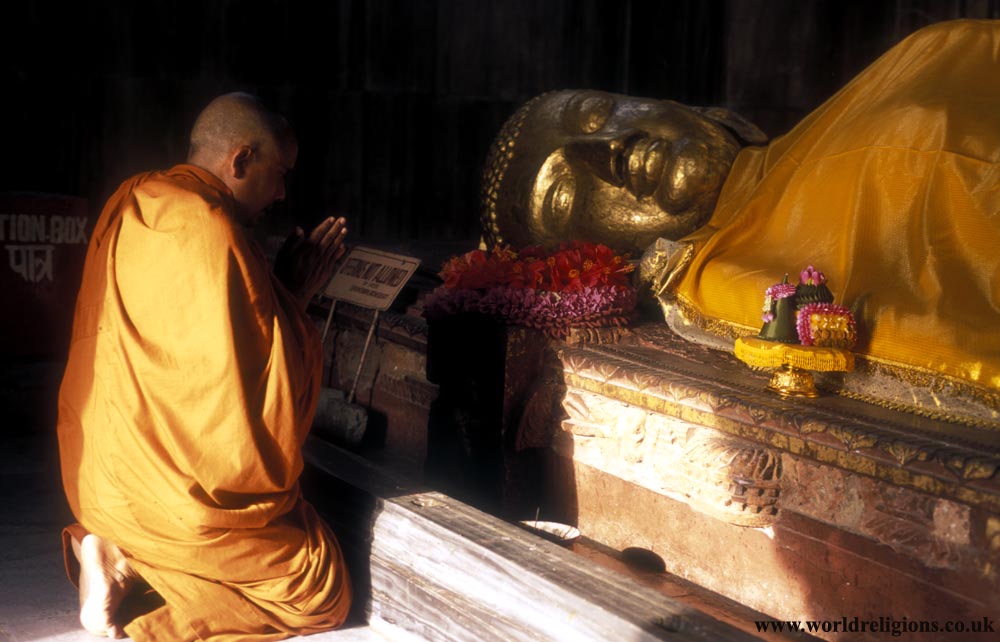 Buddha died c.487-483 BCE. His final days are described in the Pali text called the Great Parinirvana Sutra. On reaching the village of Kusinara in eastern Uttar Pradesh, he instructed Ananda, his most faithful disciple, to prepare a bed for him with its head aligned towards the north. Above is the 61 m. long dying Buddha statue in the Mahaparinivana Temple in Kusinara which all devout Buddhist hope to visit. 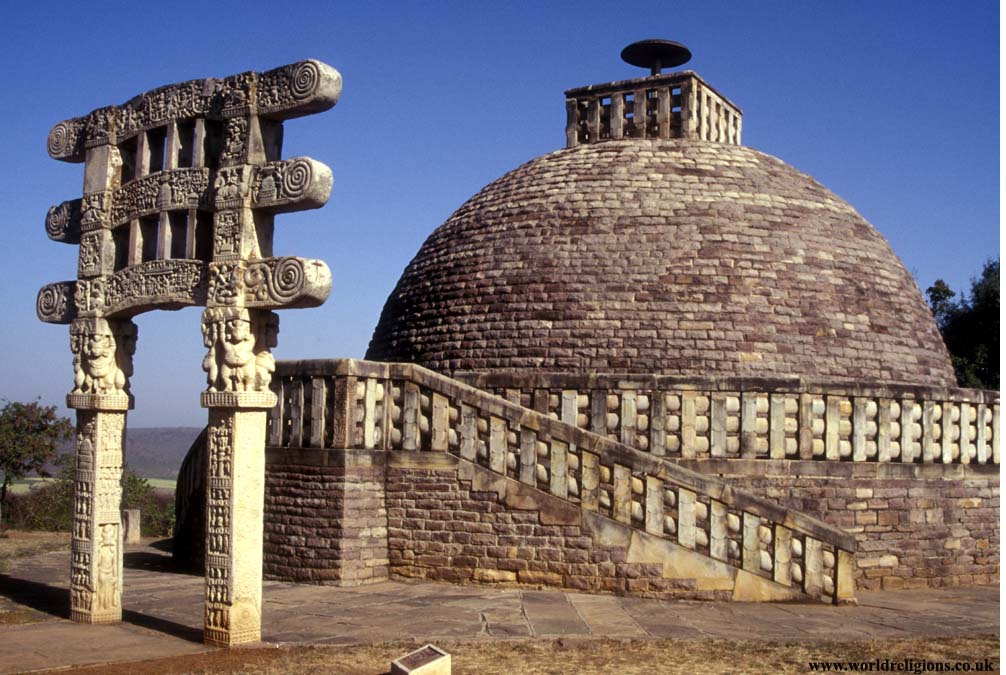 The group of Sanchi monuments, 32 km east of Bhopal in the state of Madya Pradesh, date from the Mauryan Empire, mid-third century BCE. Central is the Great Stupa, a solid hemispherical dome symbolizing the dome of heaven enclosing earth. Four gateways  surrounding the stupa are adorned with scenes from the Buddha’s life. Carvings also depict the Emperor Ashoka’s visit to the sacred Bo Tree at Bodhgaya. 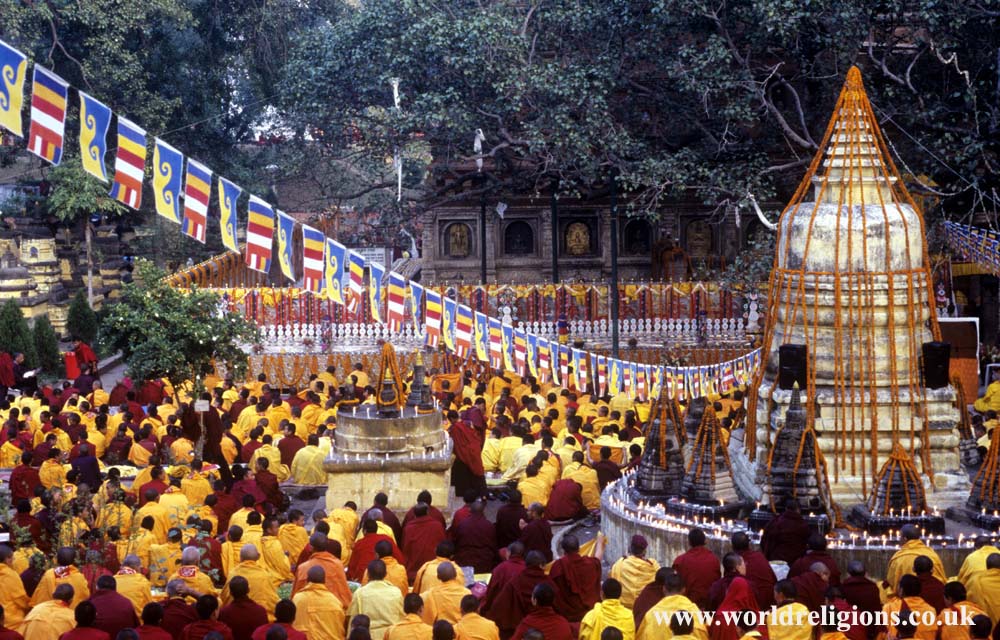 Bodhgaya in Bihar, is the centre of the universe for Buddhists. It was here, under a spreading bodhi tree, that Siddhartha Gautama spent six years meditating on the nature of life and the path to nirvana. When the young ascetic attained the higher state known as enlightenment, he became known as Lord Buddha. The Bo Tree and adjacent Mahabodi Temple were inscribed on the UNESCO World Heritage List in 2002. 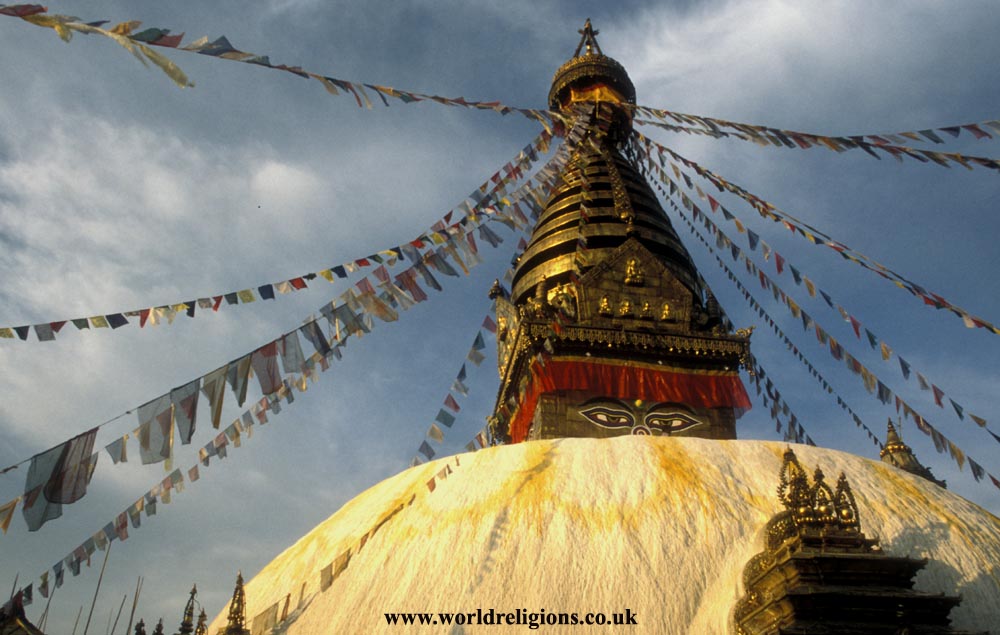 The Swayambhunath Stupa in Kathmandu is believed to have been a Buddhist pilgrimage destination since at least the 5thcentury. Legend says a miraculous lotus planted by a past Buddha blossomed into its golden spire set with two eyes. Between the eyes, the Nepali figure 1 symbolises the one righteous path to nirvana. Pilgrims include Vajrayana Buddhists of northern Nepal and Tibet and  Newari Buddhists from central and southern Nepal. Sacred texts written on prayer flags are believed to disperse as the flags flutter in the wind. 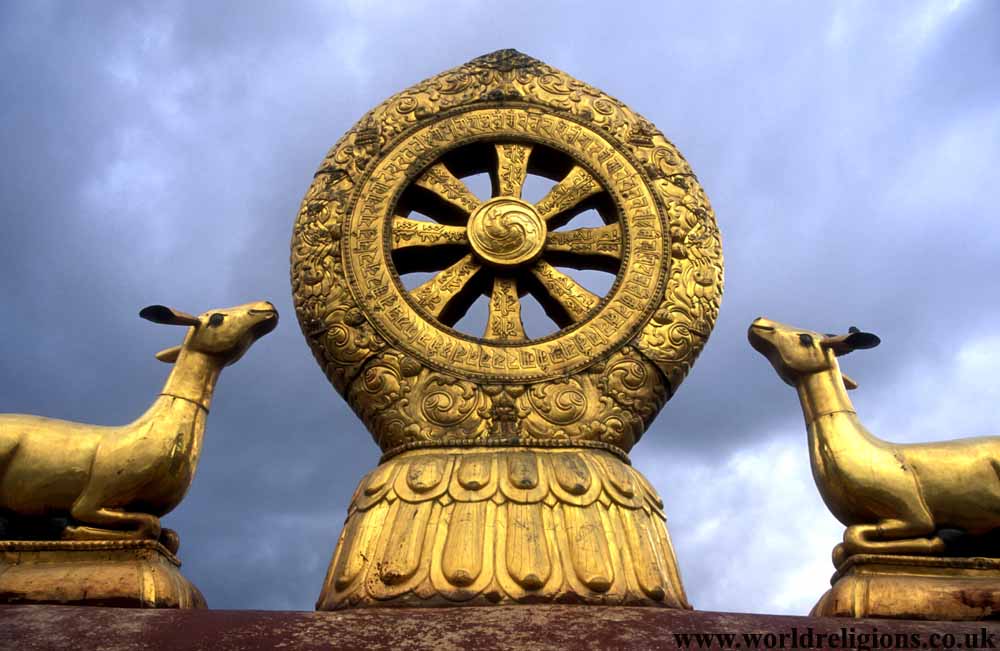 Lhasa is noted for traditional buildings related to Tibetan Buddhism. Among them is the four-storey Johkang Palace housing the Jowo Shakyamuni Buddha statue, the most venerated object for Tibetan Buddhists. The gilded bronze tiled roof of the palace is topped with two deer flanking the eight-spoked dharma wheel, or “Wheel of Law” central to Buddhist philosophy. The original palace dates from around 642 CE. 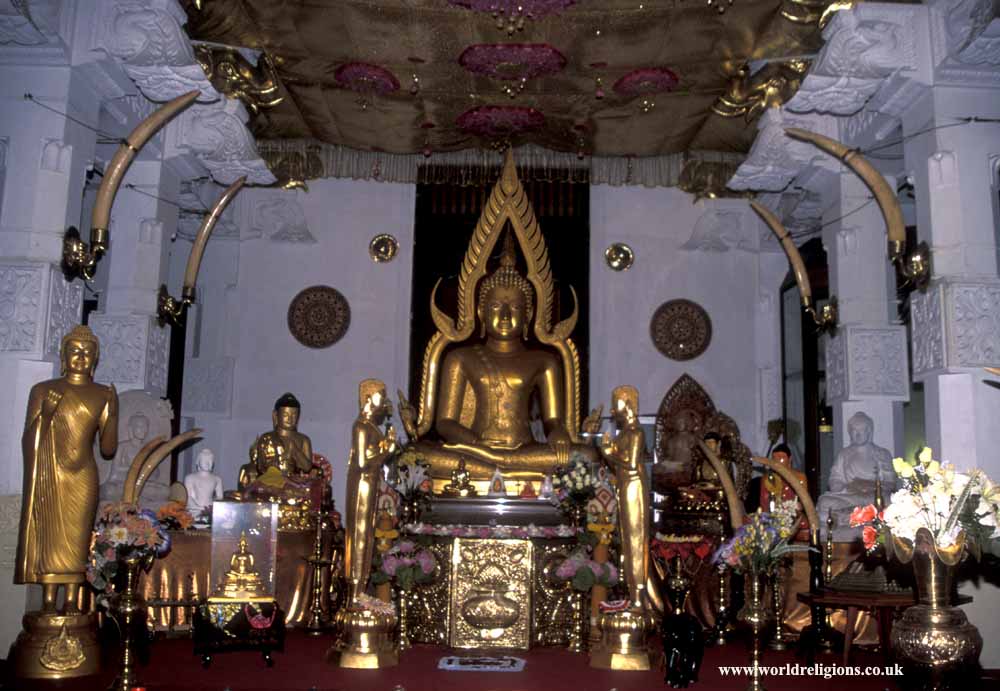 Sri Lanka abounds in Buddhist pilgrimage sites in the ancient capitals of Anuradhapura and Polonnaruwa. Everywhere are temples, stupas and rock carvings of the Buddha. There is also the Sri Dalada Maligawa in Kandy, whose shrine room contains a sacred tooth relic of the Buddha brought to the island in 4 CE. The tooth is paraded on the Maligawa temple elephant in an annual procession known as the Kandy Perahera. 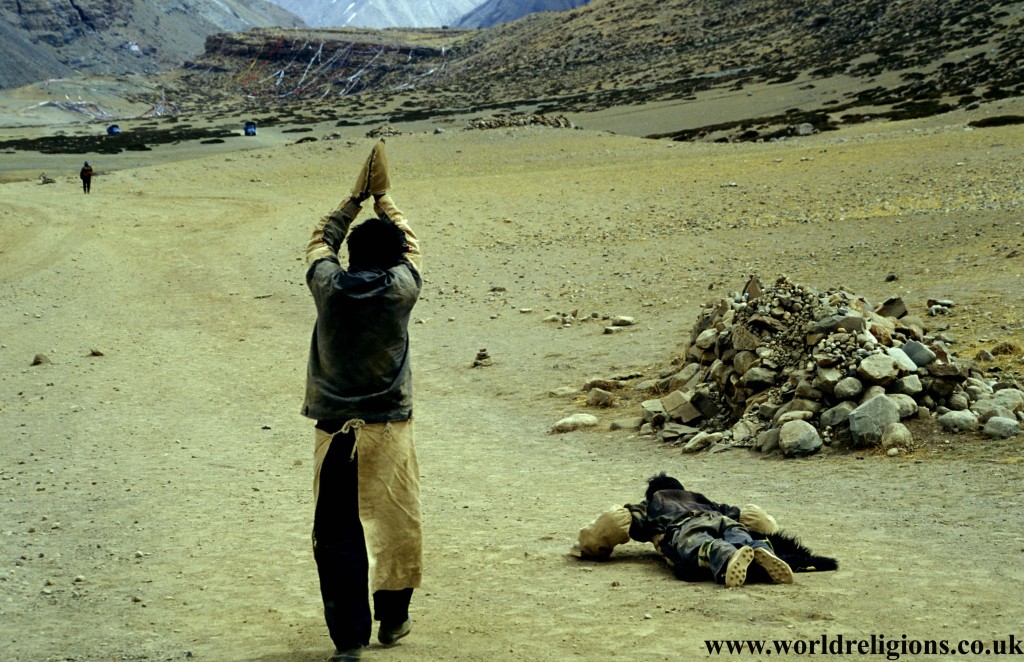 Mount Kailash, in the Trans-Himalayan region of south-west Tibet, is venerated as a holy place by Hindus and Jains as well as Buddhists. Embedded in ancient Asian myths, the sacred mountains has historically attracted pilgrims. Most walk around the base, while especially devout Tibetan Buddhists make full body prostrations the entire way round, an arduous commitment taking some three weeks. 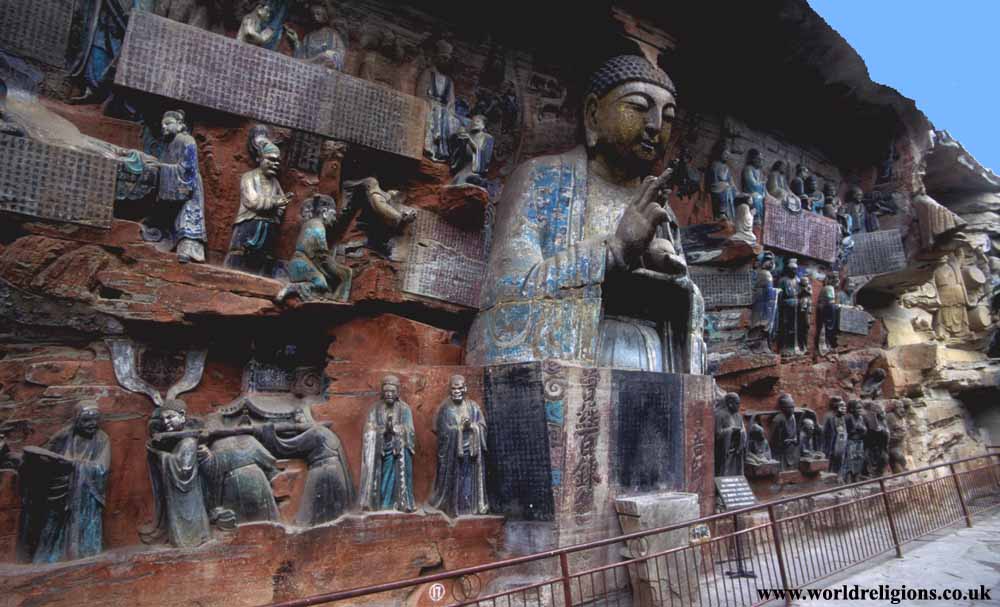 The Dazu rock carvings are a series of Buddha images, displaying Taoist and Confucian influences, in Chongqing Municipality of south-west China. The estimated 10,000 individual statues are in a remarkable state of preservation considering their age, late 9thcentury to mid 12th century. Like many Buddhist sites, today they are visited by tourists as well as Chinese Buddhist and Taoist pilgrims. 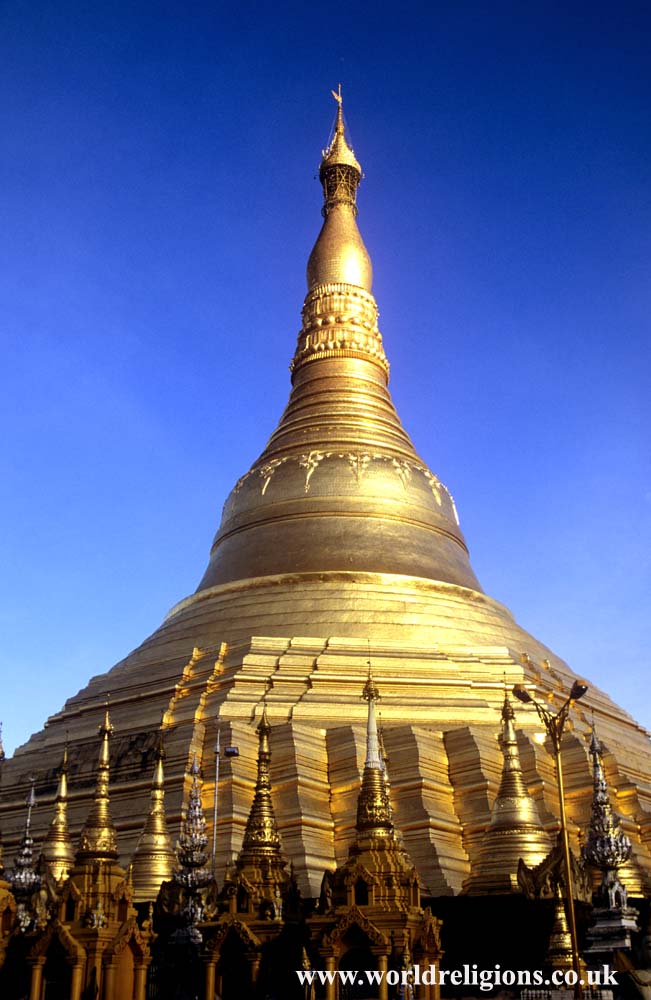 The Shwedagon Pagoda in Yangon is the most sacred Buddhist site in Myanmar. Built by the Mon people in the 6th century, it enshrines eight hairs of the Buddha and a tooth relic.The soaring gold plated stupa is crowned by a hti, or umbrella, embedded with thousands of rubies and diamonds. Entering via one of four stairways, pilgrims buy incense, candles and flowers to offer to at small shrines around its base.