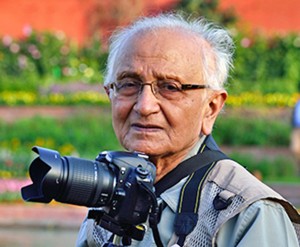 The photographer who took the striking picture on the front cover of Among Believers is Prem Kapoor who lives in New Delhi.

Prem’s interest in photography began in the 1950s when he was pursuing law studies in Kanpur, a city in the Indian state of Uttar Pradesh.

While still an amateur photographer, he began winning awards for images published in both Indian and foreign magazines. An early achievement was having a photograph selected as a First Children’s Day Postage Stamp, released by Prime Minister Jawaharlal Nehru on 14th November, 1957. Another success was a photo taken of the Indian festival of Diwali used as a cover on Reader’s Digest.

During Prem’s early days as a photographer, there were no proper roads to sacred sites such as Badrinath and Gangotri in the foothills of the Himalayas. To reach such places and record rarely photographed Hindu rituals, often meant a tough overland trek.

In 1959 Prem left the law profession to join Bharat Heavy Metals as an industrial photographer. Later he joined the Photo Division of the Indian Ministry of Information and Broadcasting in New Delhi which afforded many historic photo opportunities including coverage of the Indo-Pak War in 1971. He also accompanied both the President and Prime Minister of India on their various foreign trips.

In 1974 a generous French publisher gifted Prem with a Hasselblad which travelled with him for many years — together with a Nikon F2, won as part of an award from the Asian Cultural Centre for UNESCO in 1979.

On retiring from the ministry in 1990, Prem joined the Working News Cameramen’s Association of which he became the Patron. In 2015 in recognition of twenty-two years work as a freelance photojournalist, he received lifelong accreditation from the Press Information Bureau of the Government of India.

Whatever else he may have been doing at the time, Prem always kept his camera ready to photograph India’s colourful Hindu and Sikh festivals. He also attended several kumbha melas — mass bathing occasions — in sacred sites such as Allahabad and Haridwar when, surrounded by millions of pilgrims, taking pictures is not for anyone without the experience of religious photography.

Now in his early eighties, Prem is still active doing Feature Photography but instead of a darkroom, he uses Photoshop.