RAMADAN: The Gift of Hunger 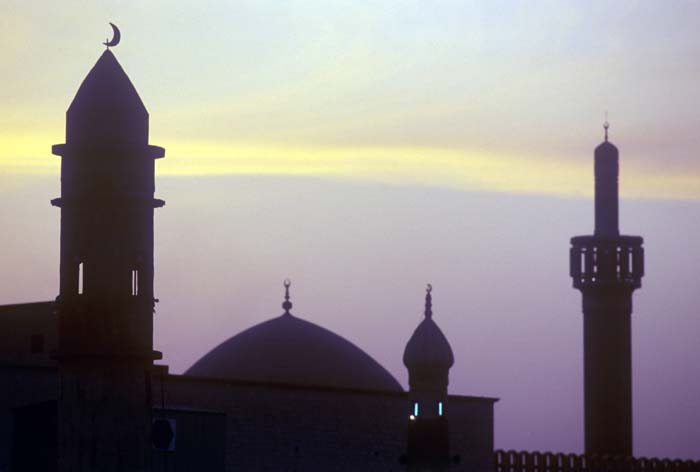 RAMADAN STARTS AT DAWN WHEN MUSLIMS FAST FROM THEN UNTIL DUSK

Ramadan, a month of sacrifice and endurance in the Muslim world is an occasion for visitors to share in the rewards of abstinence. After sunset.

However Islam is not unique in advocating disciplines at significant times of the year. Devout Christians do not consume red meat during the solemn period of Lent. Hindus eat but once a day during Shravan, a month dedicated to Lord Shiva. On Yom Kippur —the Day of Atonement—Jews, among other taboos, abstain from eating, drinking, washing or performing any sort of work for twenty-five hours.

This said, the sawm (fast) is especially difficult for Muslims since not a crumb of food, nor a drop of water can pass their lips between dawn and dusk during the entire ninth month of the Hijiri Islamic lunar calendar. Intercourse during daytime is further considered a grave sin. 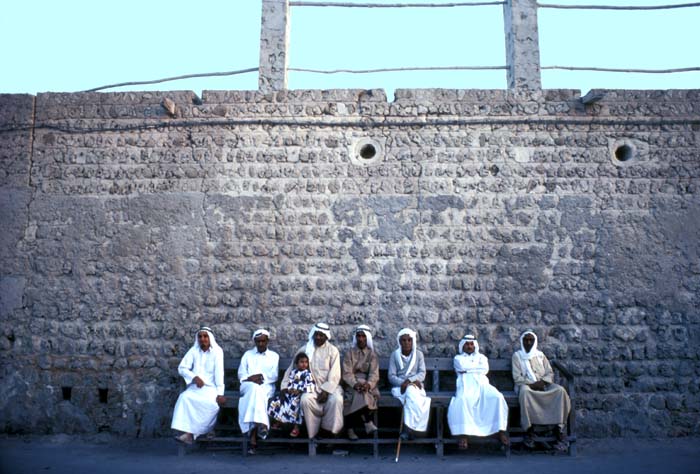 Fasting is hard enough —try it yourself —but when Ramadan falls in summer, the extreme temperatures in Middle Eastern countries push people to the limits of endurance. Then in northern Europe, where the sun may not set until 10pm, Muslims must abstain for a punishing 15-16 hours, especially difficult for the thousands of Muslim waiters when all around are indulging in food and drink. 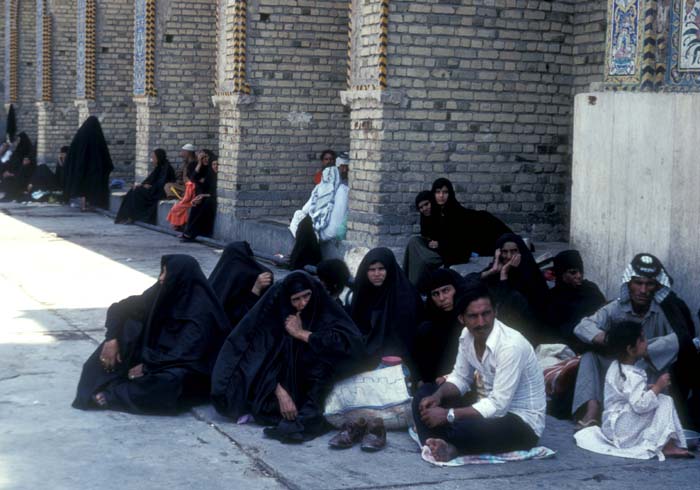 Muslims fast not merely for atonement, but in an endeavour to come closer to God through scrupulous self discipline. Fasting teaches devotion, patience and fortitude: a dry mouth and a painful stomach reminding how the poor suffer at all times of the year. The experience is spiritual as well as physical. Devout Muslims will perform an extra twenty rakkas (bendings) when offering prayers. Others may spend the daylight hours reading the Qur’an. 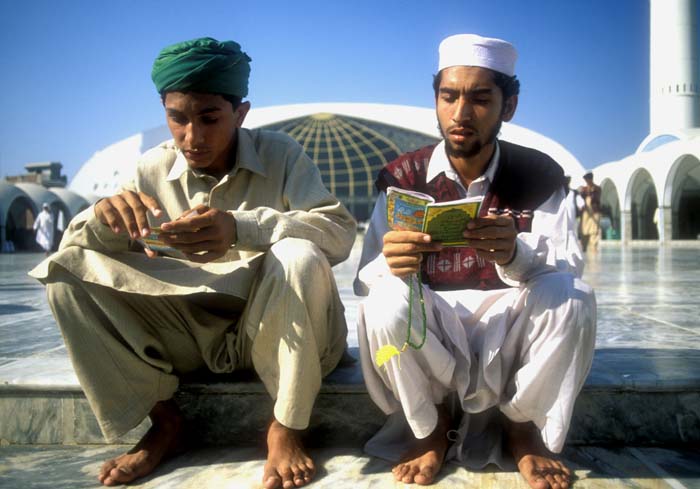 MANY SPEND THE DAYLIGHT HOURS OF RAMADAN READING THE QUR’AN

While highly personal, Ramadan is equally a social occasion bringing people together in the knowledge that irrespective of class, or wealth, all are enduring pain. A feeling of goodwill prevails. People give more generously at this time and cook large meals for the less well off. 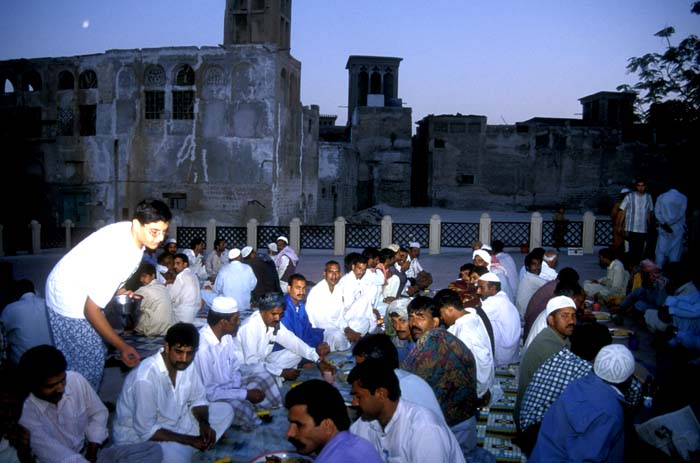 in Muslim countries, a typical Ramadan day begins when the family rises to eat a nourishing meal before dawn. Shops close after the noon prayer, but during the morning food is sold in souqs and supermarkets for women to prepare dishes to be eaten when the fast is broken.

Men pass the long daylight hours sleeping and listening to Quranic recitals on the television, but as sunset approaches people emerge to pass the final hours outdoors. 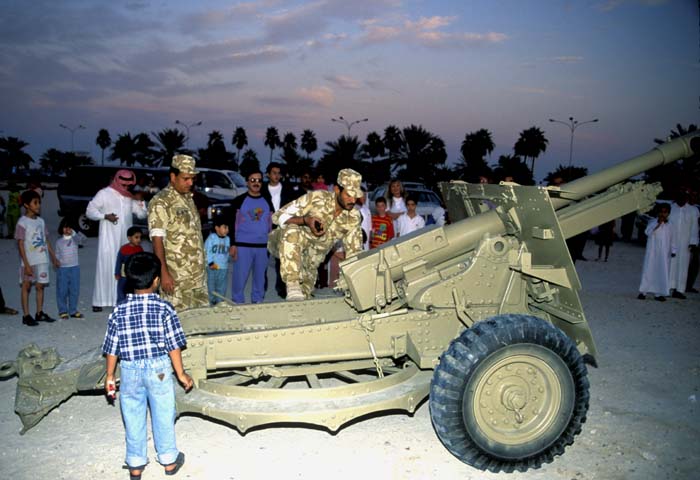 A CANNON IS FIRED TO SIGNAL THE END OF THE DAYTIME FAST IN DOHA, QATAR

Waterfront corniches in the Arab states are thronged with crowds as the sun sinks into the Gulf. At the same time, Muslims throughout the world are walking out the last minutes to dusk. Then suddenly streets empty as all head home for iftar – literally break-fast. 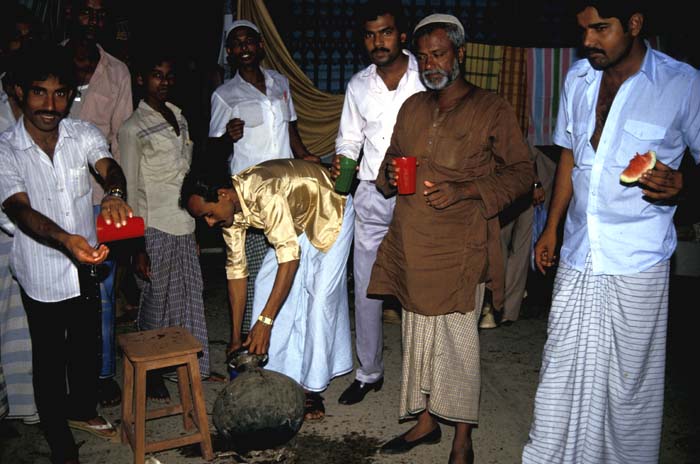 THIRSTY AFTER THE LONG FAST PEOPLE TAKE WATER AND FRUIT

Starting with water, fruit juices and dates, little is eaten at first. Soup follows, then a main meal of meat or poultry, salads and rice.Family members and invited guests commonly sit around dishes laid out on a tablecloth on the floor. Everyone enjoys their food much more for having gone so long without. Festivities last until late, Ramadan lamps twinkle on street corners and foodstalls do a brisk trade in snacks and softdrinks. 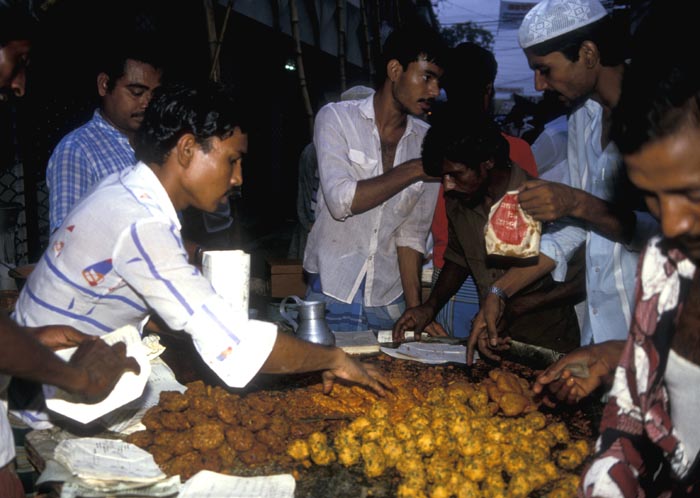 Entering into the spirit of things, children run from house to house singing traditional ditties for a reward of sweets. Parks and carousels are crowded and young men race up and down in cars, playing music and sounding horns, but shortly after midnight before next day’s fast begins, you can hear a pin drop……. 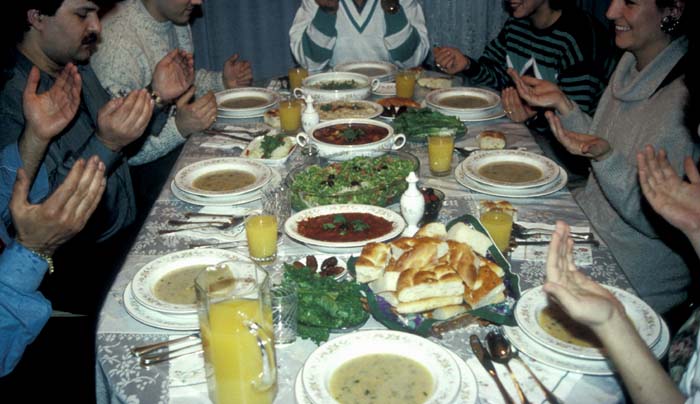