Persons real or imagined are central to worship in most mainstream religions. Christians venerate Jesus Christ with the Virgin Mary having special significance for Catholics. Buddhists revere Sidi Gautama who became the Buddha and whose effigy is found in the sacred places wherever Buddha is known to have preached. Sikhs follow the teachings of Guru Nanak, the original guru who founded Sikhism in 1469. Then there are the Hindus —at last count exceeding 1 billion —who believe in one Supreme God manifested in hundreds of male and female forms and avatars. This Supreme Being is depicted in the Hindu trimurti/trinity in which the cyclical functions of creation, preservation and destruction are symbolised by three powerful deities: Brahma, Vishnu and Shiva. With other gods and goddesses mentioned in the Vedas, and in the epic poem the Ramayana, they are worshiped in temples all over India as well as in mandirs or shrines in family homes. 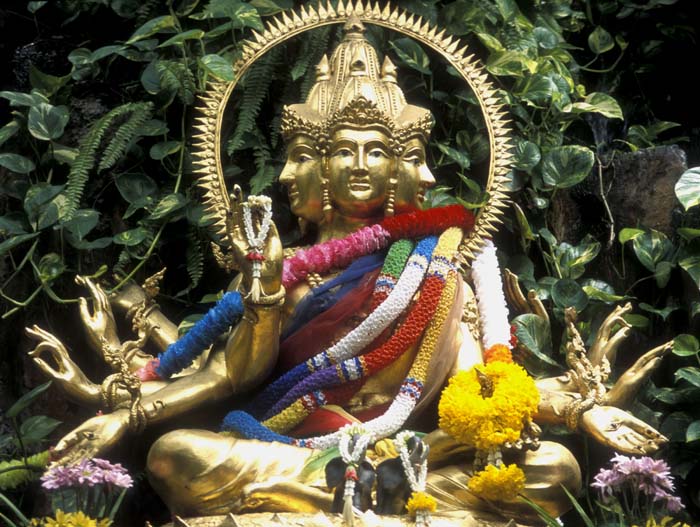 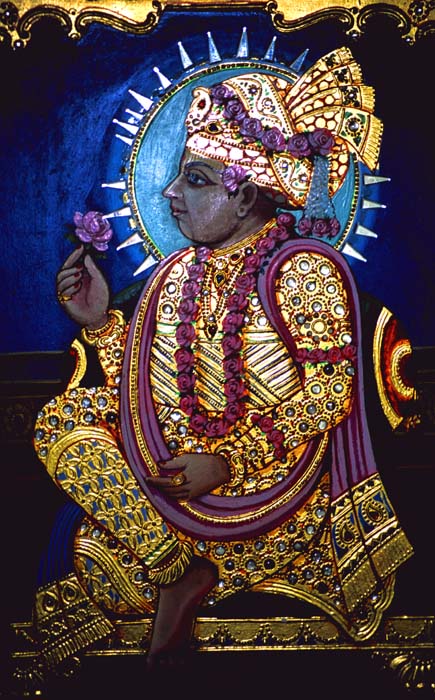 Ancient religious texts known as the puranas ascribe the creation of the Universe to Lord Brahma, the first god in the Hindu triumvirate. While an integral part of the Supreme God, he is no longer widely worshiped since it is considered his creative work has been done. Brahma’s consort is Saraswati, the Goddess of Music and Learning. 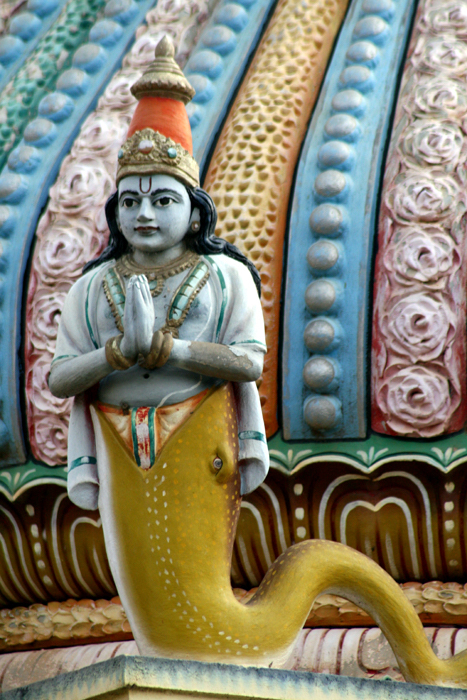 Vishnu is the second member of the trimurti. He maintains moral order and harmony in the Universe which is periodically destroyed by Shiva in order to prepare for the next cycle of creation. Hindu scriptures speak of Vishnu appearing as ten avatars which include a fish (here) a tortoise and a boar. 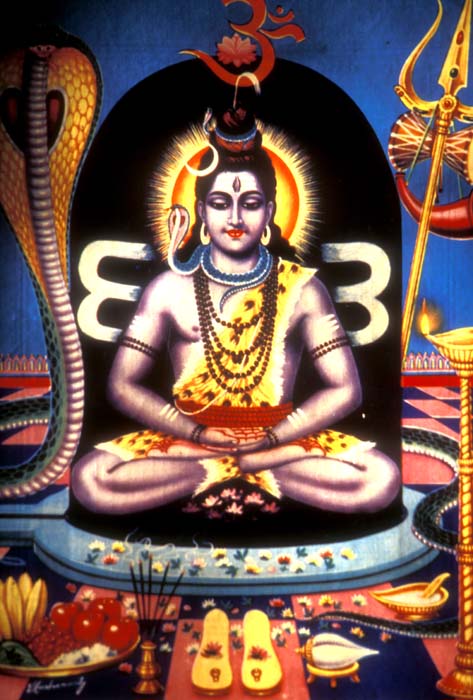 Shiva, the third member of the trimurti is tasked with destroying the Universe in order to prepare for its renewal at the end of each cycle. Shiva’s destructive power is regenerative, a necessary attribute to making renewal possible. Symbolising strength and virility he has many devotees known as Shaivites. 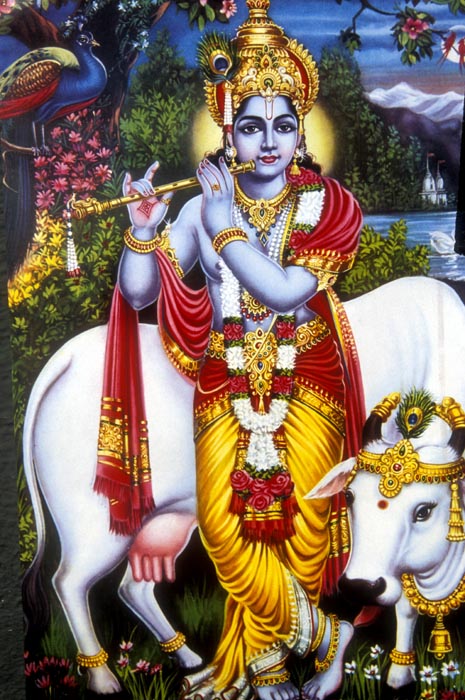 Hindus identify Lord Krishna as the teacher of the sacred Bhagavad Gita. From Kṛṣṇa, the Sanskrit word for the colour blue, Krishna is often depicted as a cow-herder cavorting in lush pastures. His promise that he will manifest himself whenever moral order declines has sustained Hindu belief for thousands of years. 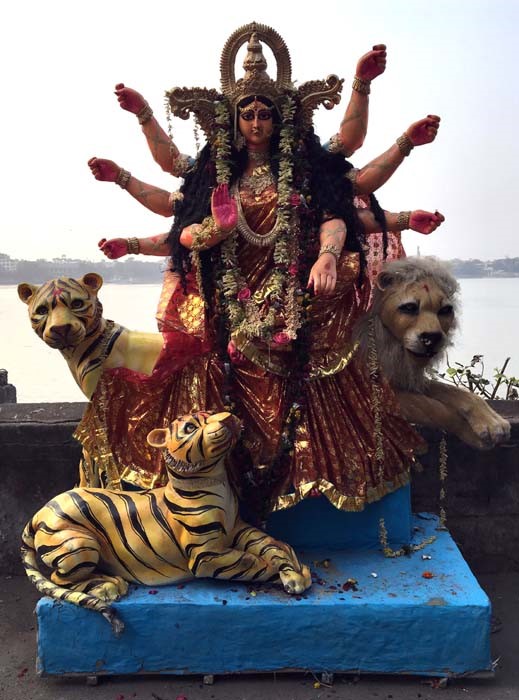 Kali, or Durga Devi, is the powerful Mother Goddess who fights the buffalo demon Mahishasura in order to restore dharma. While terrifying to her adversaries, she is equally filled with love for her devotees. Durga Puja, a festival marking the battle, is held all over India, especially in her home city of Kolkata 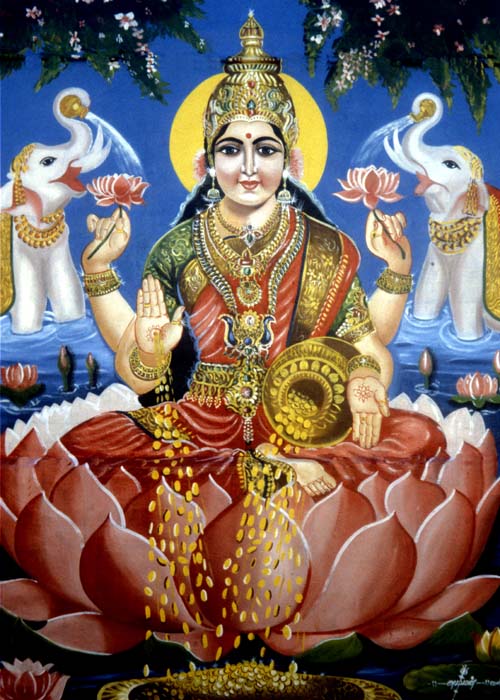 Lakshmi, Goddess of Wealth and good fortune, is prominent among Hindu female deities. The consort of Lord Vishnu, she has many followers especially among business people who lay their accounts before her image in hope of enjoying a prosperous year. A Lakshmi puja is held on the third day of Divali 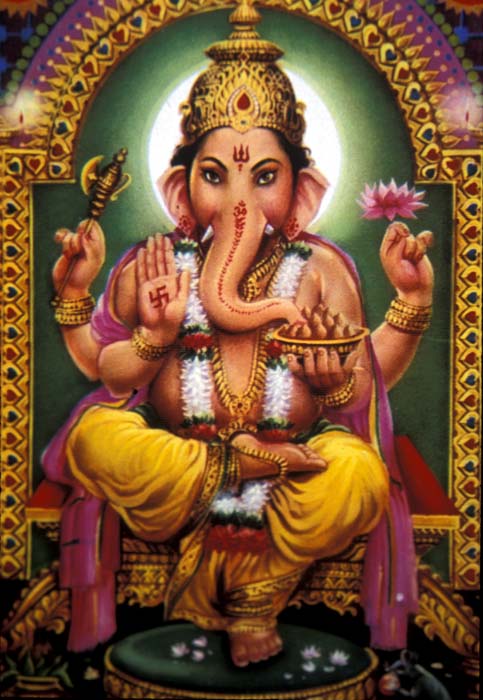 Lord Ganesha, the jolly god with an elephant head, occupies a special place in the hearts of Hindus. Most families have a picture, or statue of him, in the home and he is worshiped at small street shrines as well as in Hindu temples. The annual festival of Ganesh Chaturthi celebrates his birthday. 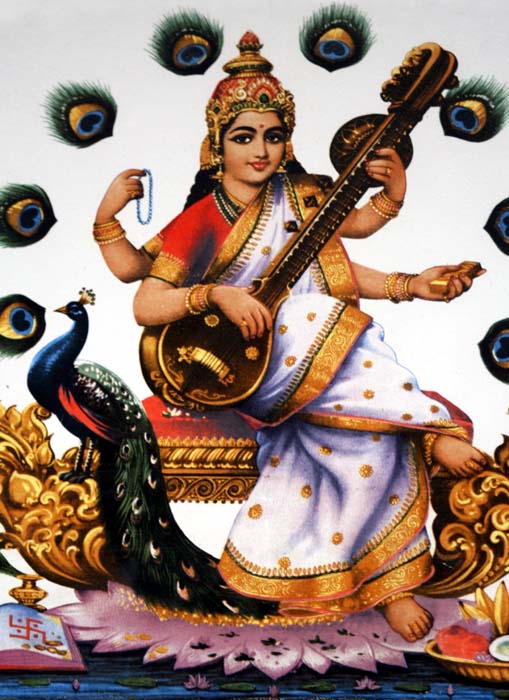 Mentioned in the Rigveda, Saraswati the goddess of learning, wisdom, and music. Students offer prayers to her during the school term and especially before their examinations. She is often dressed in white symbolizing light, knowledge and truth. Her four hands hold a book, a mālā rosary, a water pot and a musical instrument. 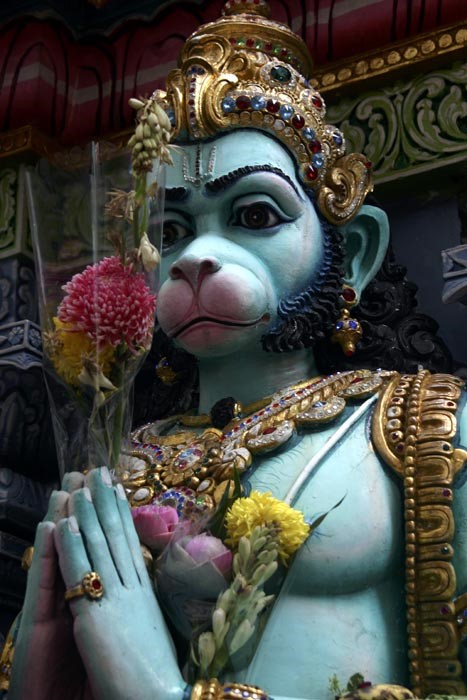 Hanuman is widely worshiped in Hinduism. Starring in the epic poem, the Ramayana, he is celebrated for his strength, devotion, and courage while helping Rama (an avatar of Lord Vishnu) battle the demon king Ravana. His value lies in inspiring his followers to conquer obstructions in their own lives. 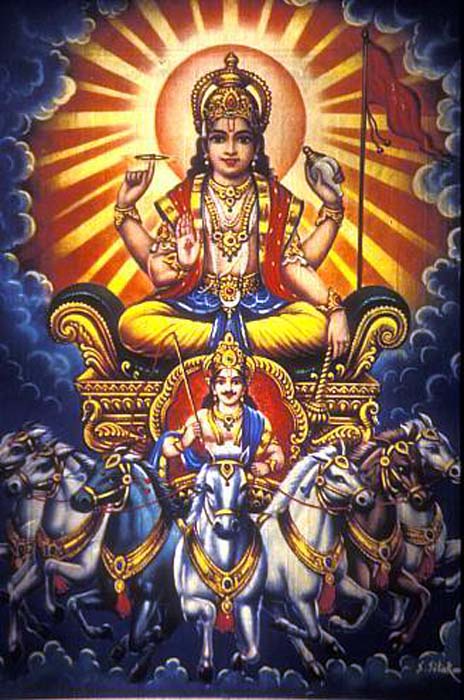 Surya, the golden Sun God is usually depicted arriving on a chariot pulled by seven horses. Once ranked in importance with Vishnu and Shiva, he has many temples dedicated to him and is invoked in the Gayatri mantra, uttered daily at dawn by millions of Hindus.