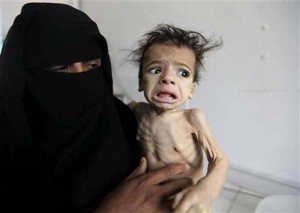 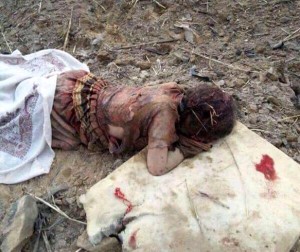 The photo of the little Syrian boy who drowned and was washed up on a Turkish beach, alerted the world to the risks taken by refugees fleeing the war-torn Middle East. Equally tragic is this picture of a young girl lying dead in the garden of her home in Yemen.

Day and night for more than a year, Saudi Arabian warplanes have bombed this little known country at the mouth of the Red Sea. Dubbed Arabia Felix by the ancients, today Yemen has become Arabia Miserabilis

More than 2,800 civilians have been killed in indiscriminate air raids. Precious heritage sites such as the Queen of Sheba’s palace in Marib have been pulverised. So too has Yemen’s vital infrastructure including the Red Sea port of Hodeidah.

Added to this, the Arab coalition’s naval blockade which is preventing relief supplies from entering the country has resulted in a humanitarian crisis. People may be dying of hunger in the beseiged town of Madaya, in Syria, but the numbers suffering from malnutrition in Yemen run into the hundreds of thousands.

Why is the international community indifferent to the destruction of Yemen when both AQAP (Al-Qaeda in the Arabian Peninsula) and ISIS are waiting in the wings?

With arms sales worth some £10 billion to Saudi Arabia, Britain, for one, is tight lipped on the matter.