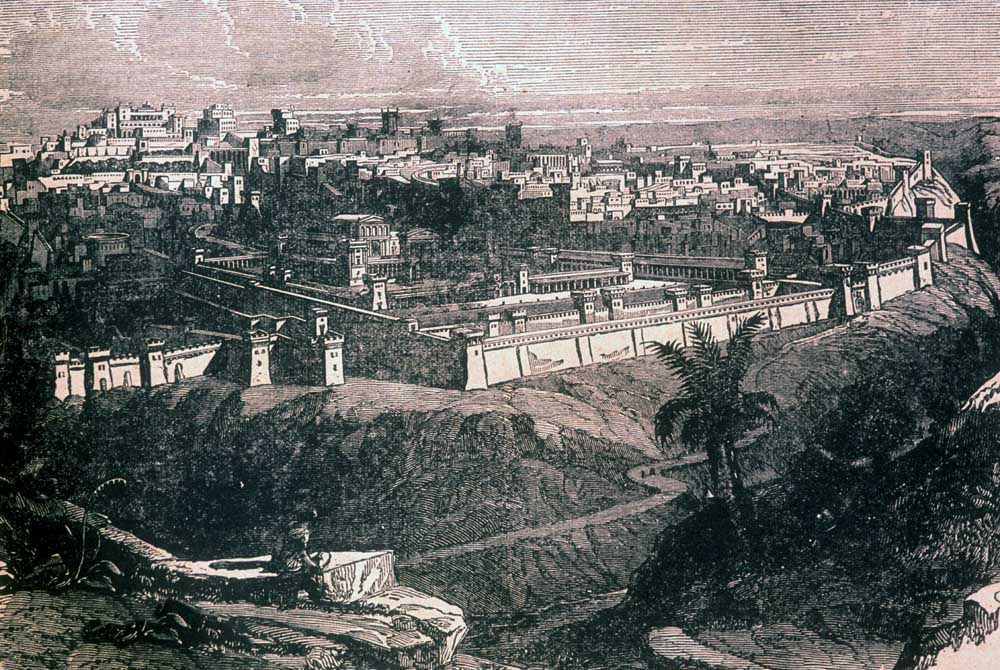 JERUSALEM AS IT MAY HAVE LOOKED AT THE TIME OF CHRIST

A holy city for Judaism, Christianity and Islam, Jerusalem is central to the beliefs of all three religions. Indeed some early maps depict the ancient walled city as the centre of the world. Venerated and fought over, Jerusalem has been razed and rebuilt more than a dozen times. In 1981, both the Old City containing the sacred sites and its Ottoman-built walls, were inscribed on the World Heritage List. 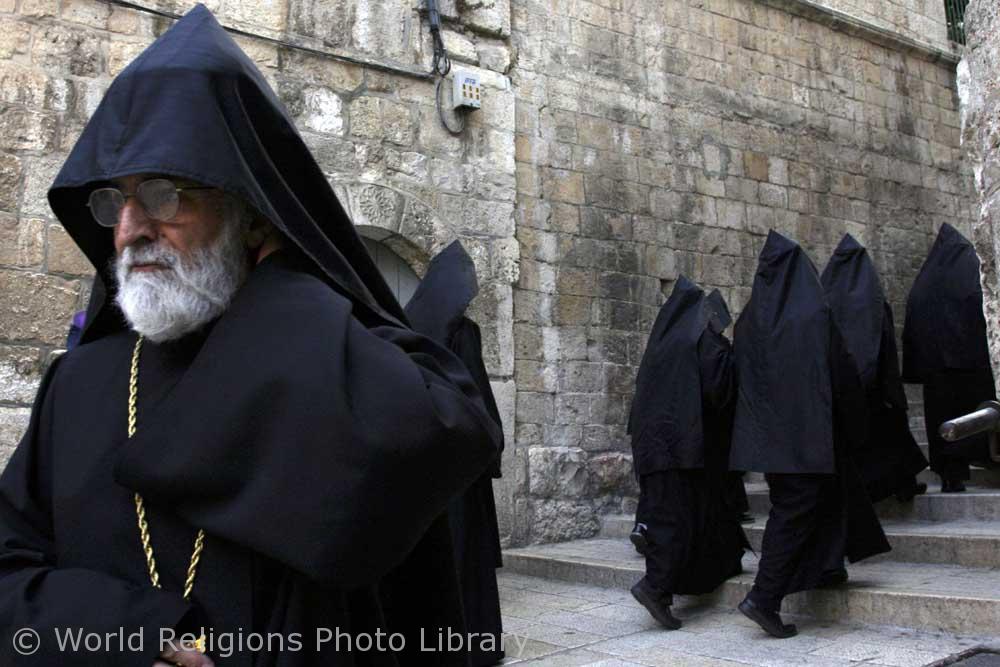 ARMENIAN PRIESTS IN THE OLD CITY

Divided into four distinct quarters: Christian, Jewish, Muslim and Armenian, the meandering, crowded heart of Jerusalem is visited by some 3.5 million  tourists a year, the majority from America followed by Russia, then France.

Local guides know that a priority for Christian visitors is the Church of the Holy Sepulchre believed built on the site where Jesus was crucified and where his body was anointed on the Stone of Unction, located just inside the main entrance. 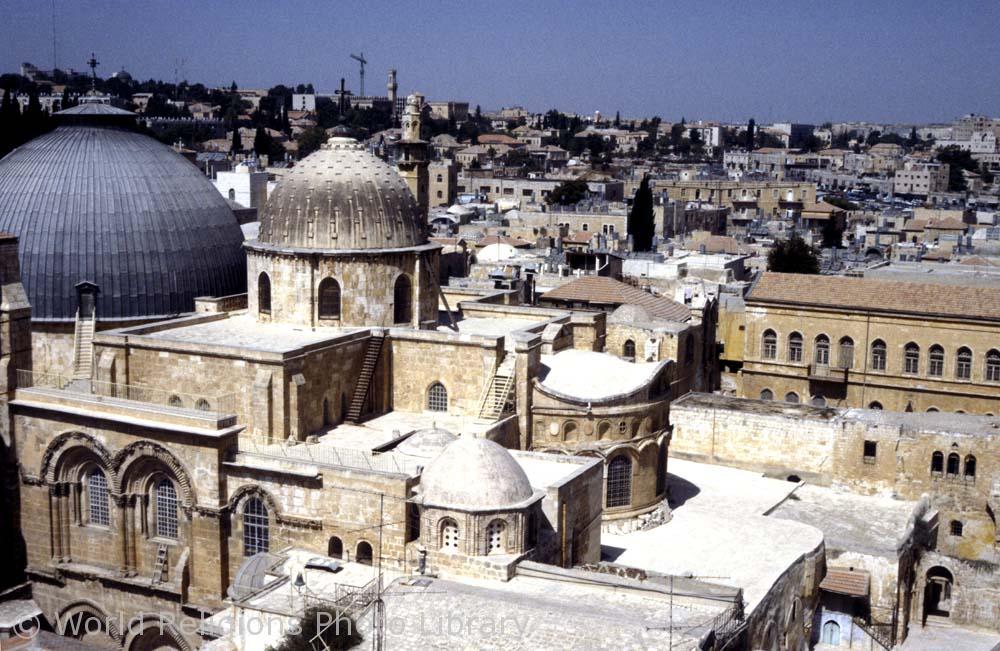 CHURCH OF THE HOLY SEPULCHRE, FOUNDED BY EMPEROR CONSTANTINE IN 335 CE 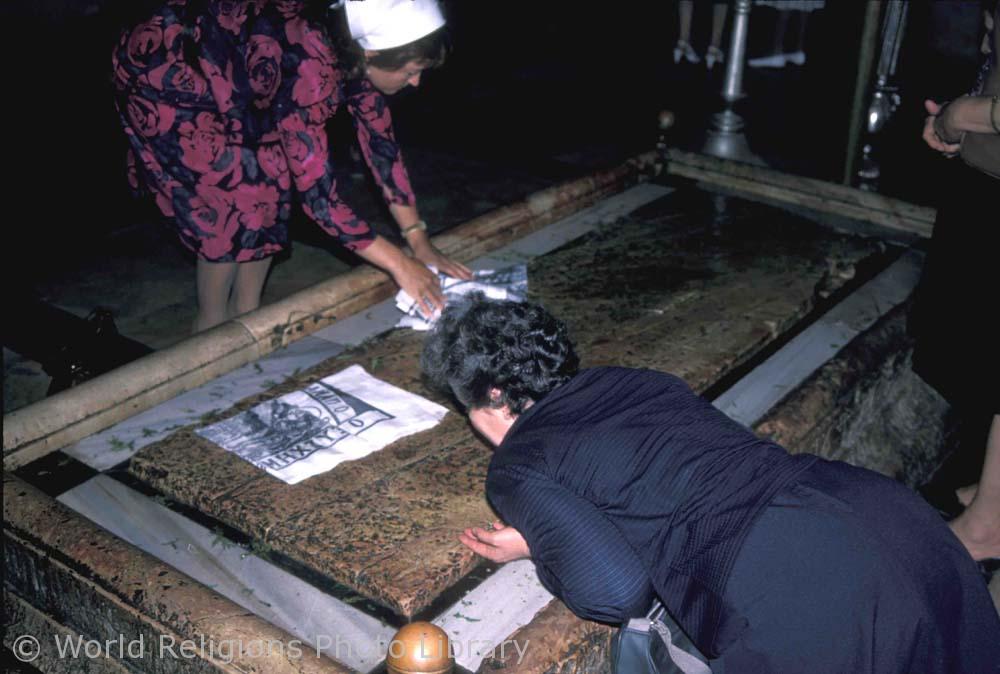 ITALIAN PILGRIMS AT THE ‘STONE OF THE UNCTION’

The church is divided into zones administered by different custodians: Greek Orthodox, Franciscan, Coptic Christian, Armenian and Ethiopian Orthodox whose recorded presence in Jerusalem dates from the 4th Century and who are allocated the roof. 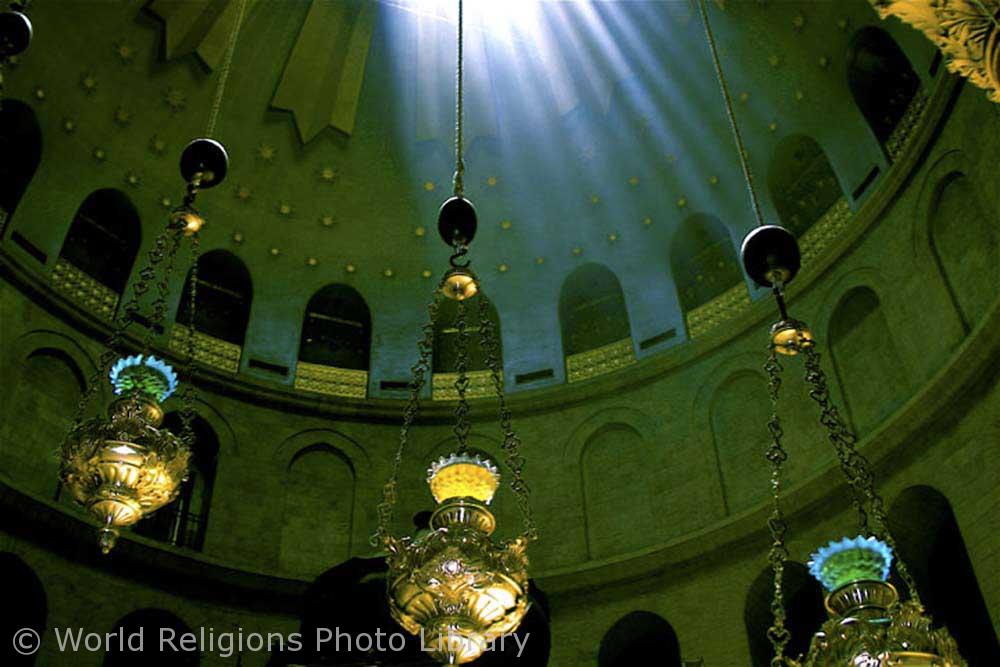 LOOKING UP AT THE DOME, CHURCH OF THE HOLY SEPULCHRE

The next most sacred site for Christian pilgrims is the Garden Tomb from where it is believed Christ rose from the dead and ascended into Heaven. (Matthew 28:1-10). Within the Old City, scores of other holy sites include the Stations of the Cross where Christ walked along the winding route known as the Via Dolorosa. 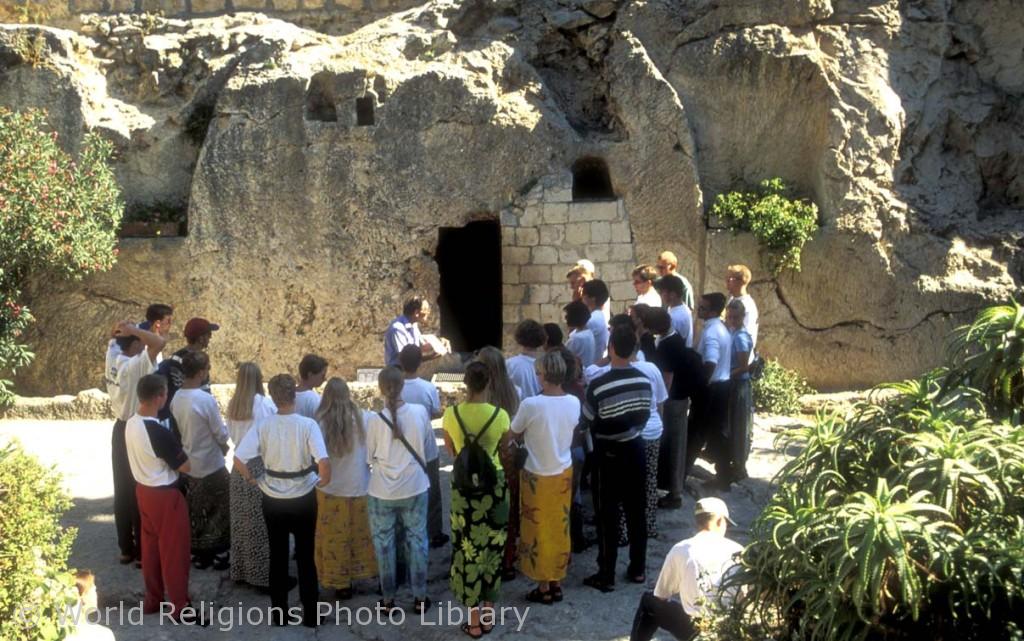 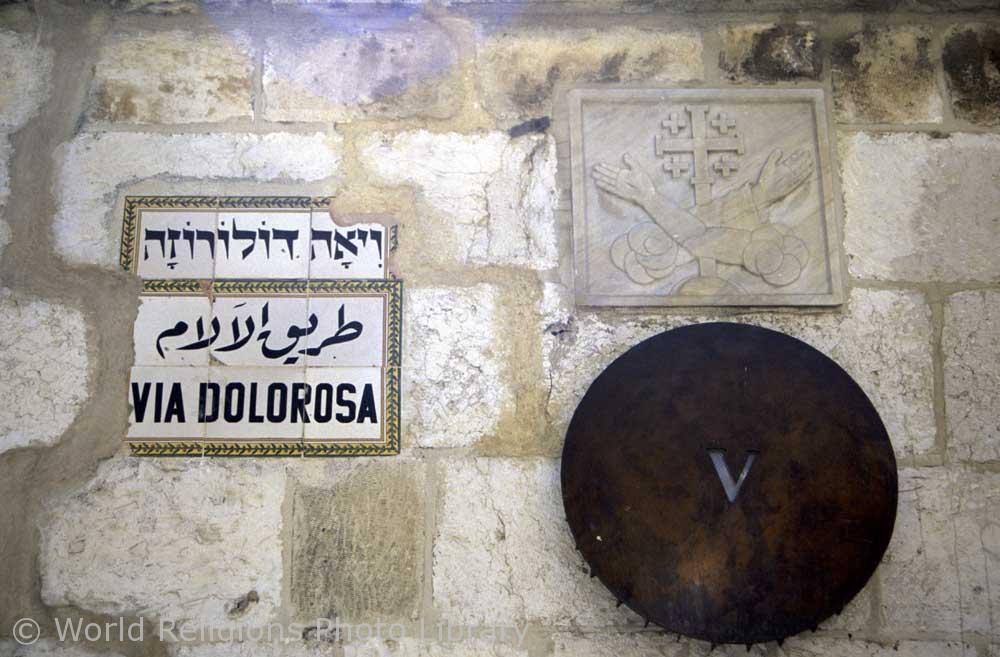 In the heart of Jerusalem is the Temple Mount, al-Haram ash-Sharif in Arabic (Noble Sanctuary) enclosing 35 acres of gardens, fountains and religious buildings of immense significance for Muslims, and also for Jews. 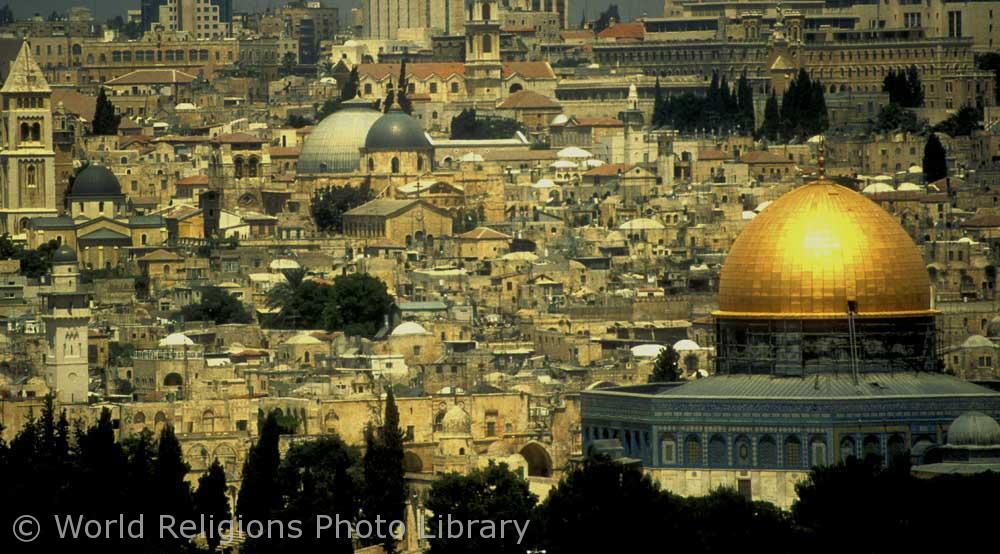 THE DOME OF THE ROCK, MUSLIM SHRINE ON THE TEMPLE MOUNT

At its southern end of the sanctuary is Al-Aqsa Mosque, dating from 705 CE the focus for Jerusalem’s Muslim community. Hosting daily prayers, the mosque can accommodate 5,000 worshippers on  holy days such as eid al-fitr, the feast following the end of the fast month of Ramadan. 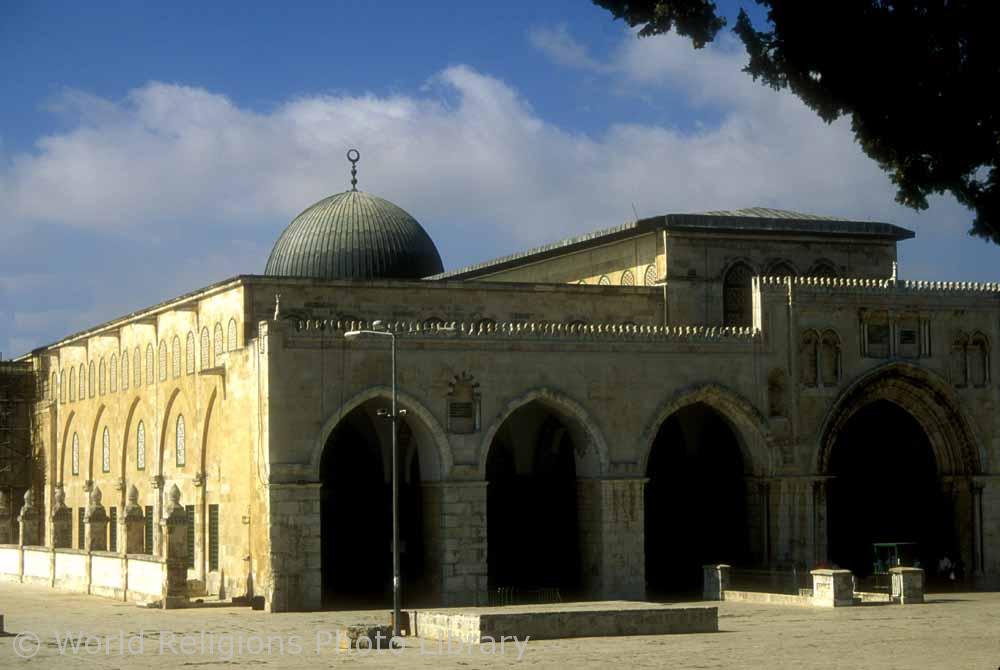 THE AL-AQSA MOSQUE ON THE TEMPLE MOUNT, THIRD MOST HOLY SITE IN ISLAM

Planted in the centre of the sanctuary is the Dome of the Rock, a gleaming shrine erected over the rock where Muslims believe the Prophet Muhammad made his miraculous “Night Journey” into Heaven. Jewish tradition associates the rock as the place where Abraham was willing to sacrifice his son, but was stopped from doing so by an Angel of God. (Genesis 22.2-8). The oldest Islam edifice in Jerusalem, the shrine was raised by the Umayyad Caliph Abd-al-Malik between 688-691 CE. 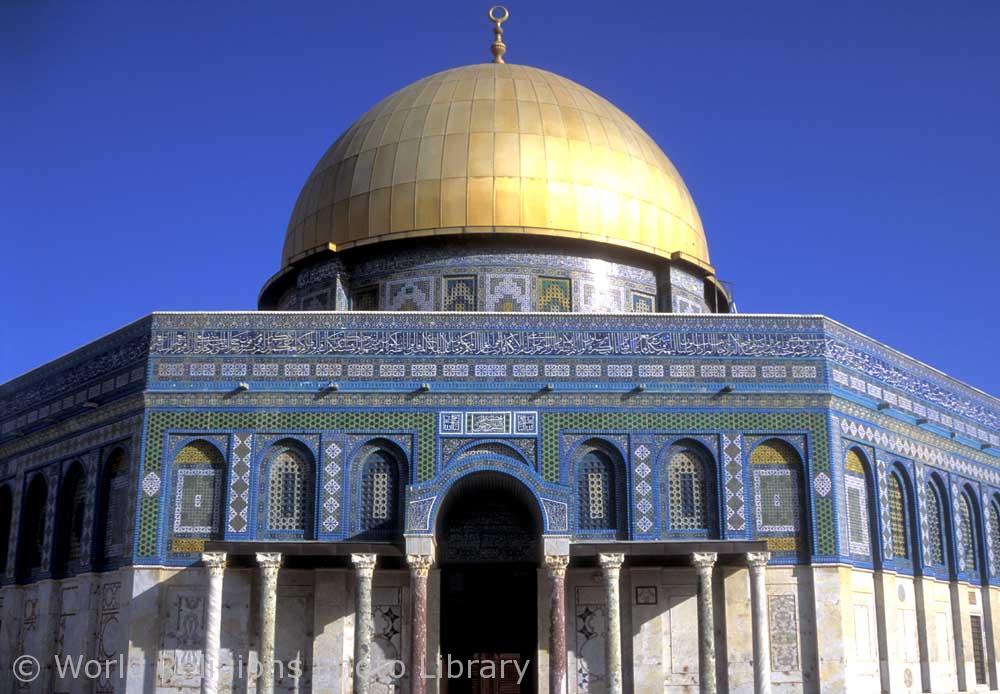 THE DOME OF THE ROCK, TILEWORK COVERED WITH VERSES FROM THE HOLY QUR’AN

Below the sanctuary is the Western Wall, formerly known as the Wailing Wall, the holiest of sites for Jews who come there to mourn the loss of the Second Temple destroyed by Rome in 70 BCE. 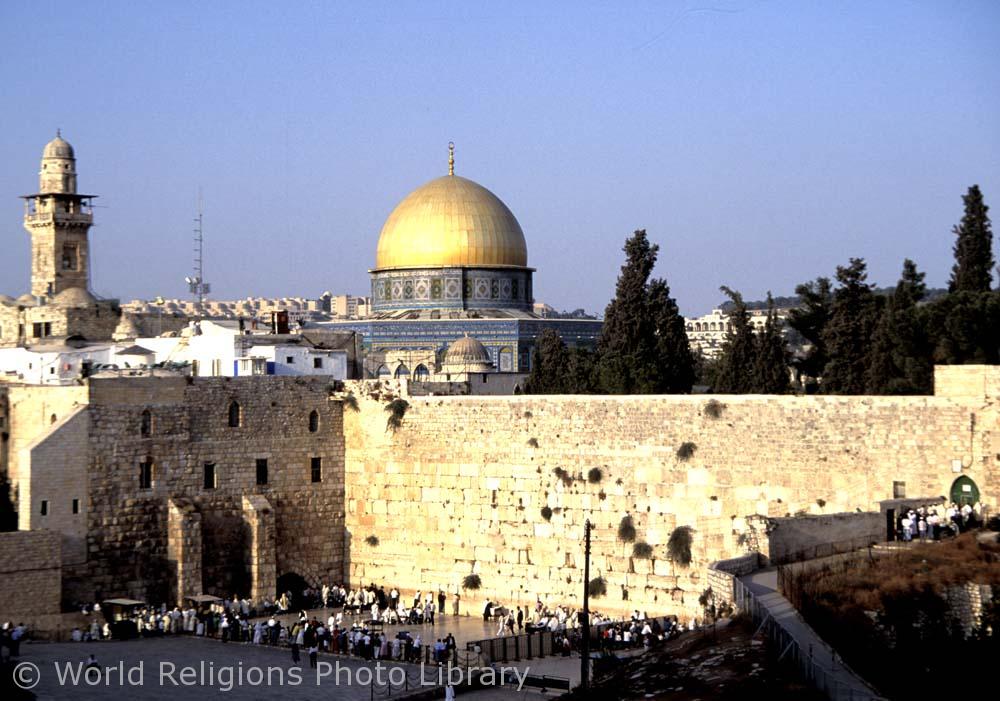 THE WESTERN WALL, ALL THAT REMAINS OF THE SECOND TEMPLE

Jews from all over the world, come to pray at the wall where they believe God will hear their prayers. The most devout scribble a wish on a scrap of paper and wedge it into gaps between the huge lower stones which date from Herodian times. 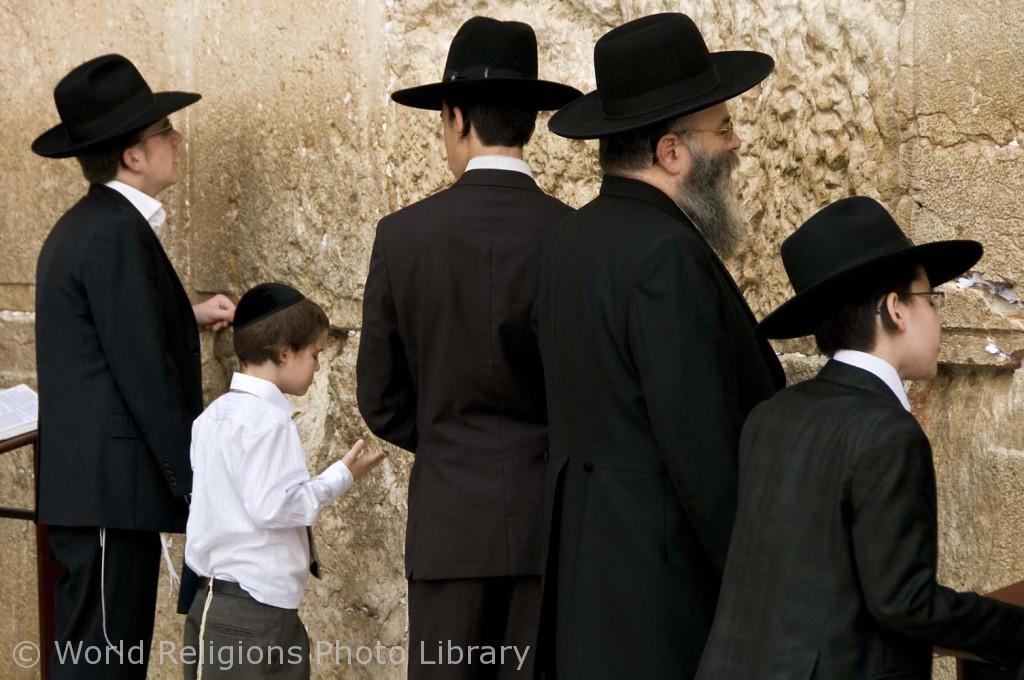 ORTHODOX JEWS PRAY AT THE WESTERN WALL, MOST SACRED SITE IN JUDAISM 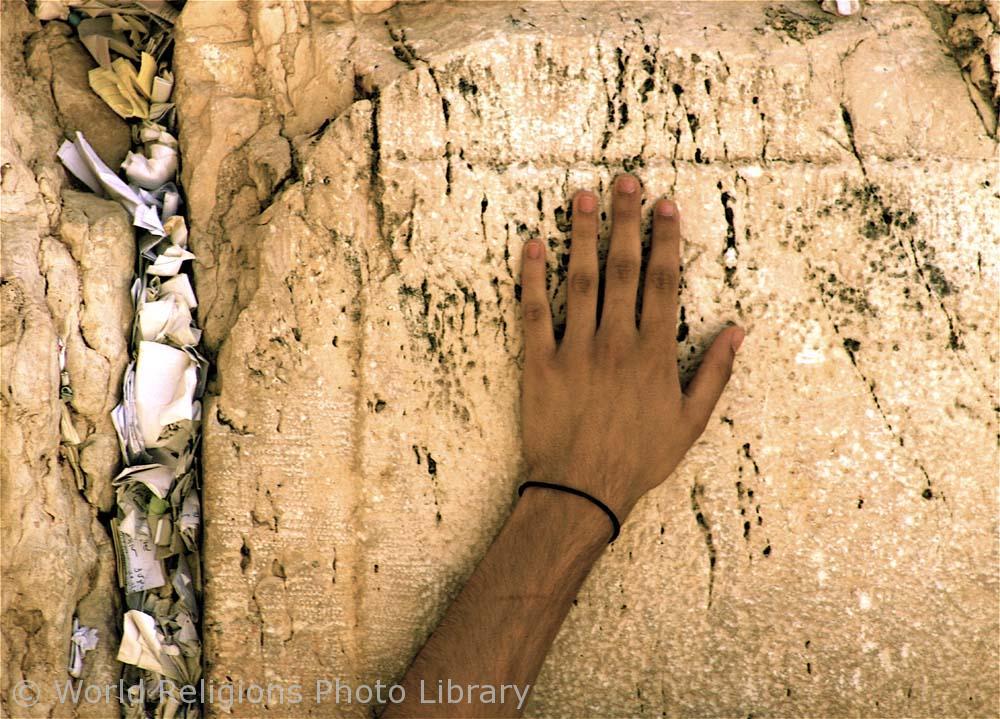 SCRAPS OF PAPER, WITH REQUESTS TO GOD, ARE JAMMED BETWEEN THE ANCIENT STONES

Pilgrimage tours visiting Jerusalem’s sacred treasures are packaged by many travel agents. It is important to wear comfortable shoes as many sites in the Old City can only be accessed on foot. 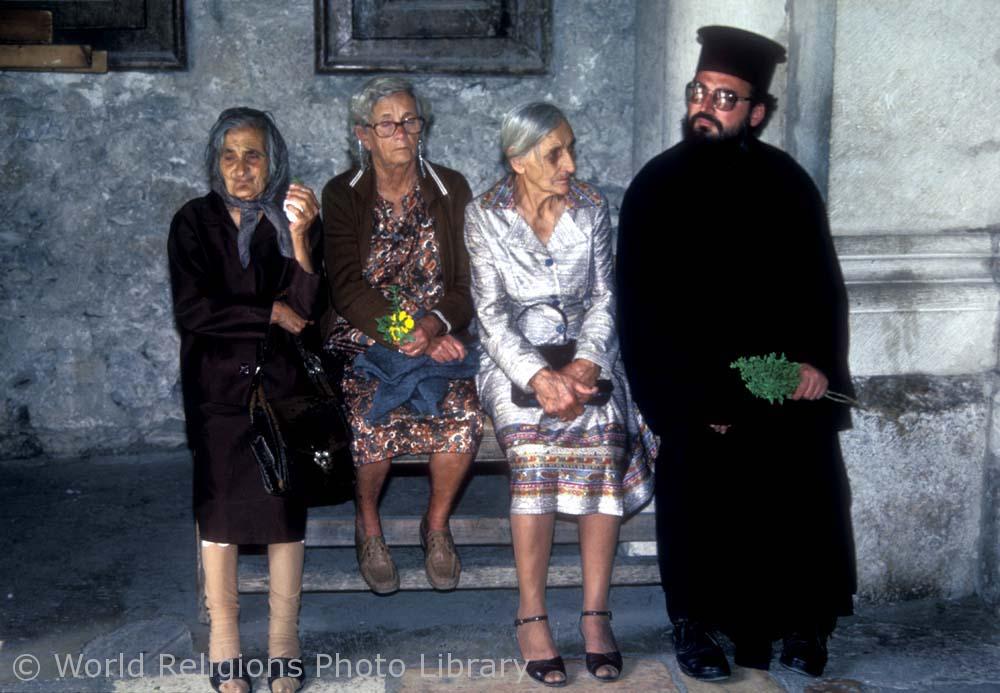