Trump’s decision to move the US embassy from Tel Aviv to Jerusalem is distressing for Palestinians not only for political reasons since East Jerusalem was seen as capital of a future Palestinian state, but because al Haram esh-Sharif (the Noble Sanctuary) in the heart of the old city contains places of worship associated with the Prophet Muhammad of equal importance to Mecca and Medina. 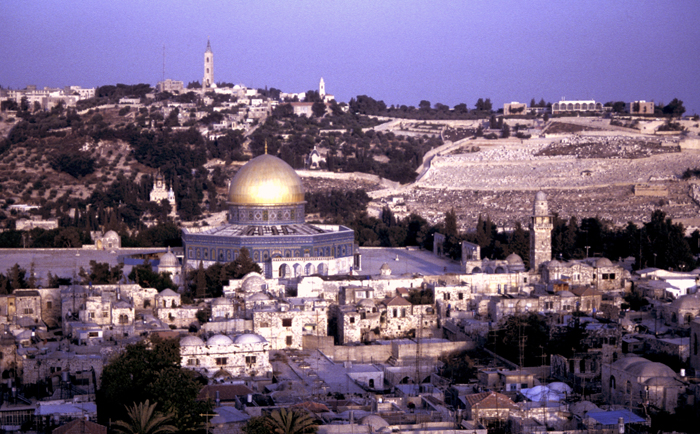 VIEW OF THE NOBLE SANCTUARY IN EAST JERUSALEM. IT IS DOMINATED BY THE DOME OF THE ROCK BUILT BY THE UMAYYAD CALIPHS RULING FROM DAMASCUS IN 692 CE. AL-AQSA MOSQUE IS LOCATED AT THE SOUTHERN END OF THE PLATFORM FACING MECCA. 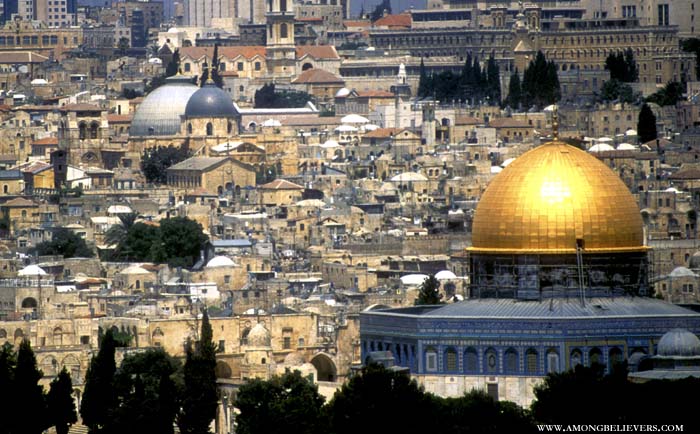 THE DOME OF THE ROCK, QUBBAT AS-SAKRAH, IS AN EARLY EXAMPLE OF MUSLIM ARTISTIC GENIUS. IT IS BUILT OVER THE SACRED ROCK ASSOCIATED WITH THE MIRACULOUS MI’RAJ, OR ‘NIGHT JOURNEY’, MADE BY THE PROPHET MUHAMMAD FROM MECCA TO JERUSALEM. 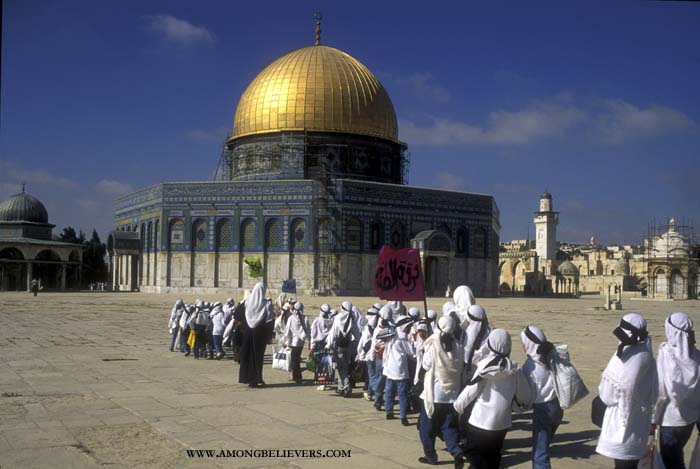 PALESTINIAN SCHOOLCHILDREN VISIT THE DOME OF THE ROCK IN EAST JERUSALEM, A SACRED MUSLIM SHRINE, IT IS BUILT OVER THE ROCK FROM WHERE, AFTER OFFERING A PRAYER, THE PROPHET MUHAMMAD ASCENDED INTO HEAVEN IN THE PRESENCE OF GOD. 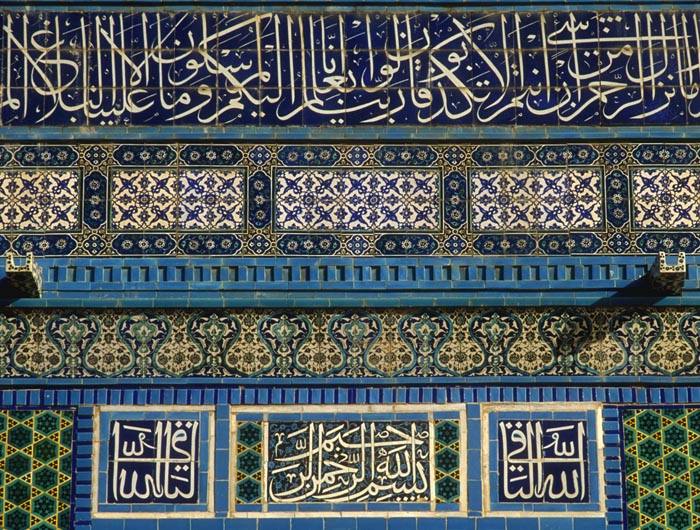 EVERY INCH OF BUILDING IS COVERED IN GLEAMING TILES EMBELLISHED WITH GEOMETRIC PATTERNS, TYPICAL OF ISLAMIC ART, AND STYLISED CALLIGRAPHY RECOUNTING SIGNIFICANT EVENTS AND VERSES FROM THE HOLY QUR’AN. 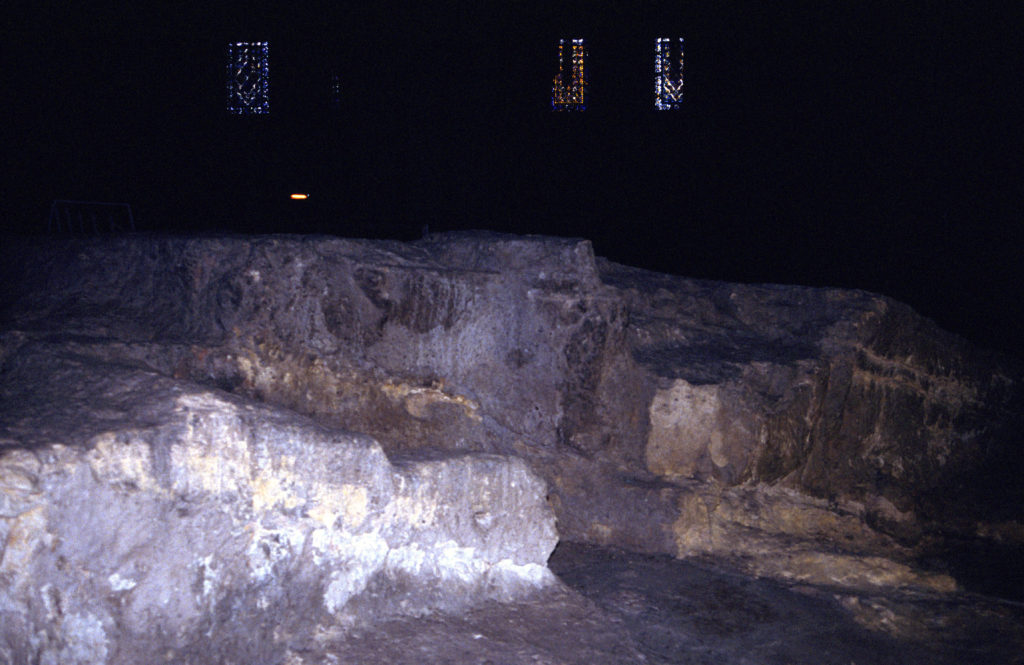 THE SACRED SHRINE IS CONSTRUCTED OVER THE ROCK FROM WHERE THE PROPHET ASCENDED INTO HEAVEN. THE FIFTH CALIPH, ABD AL-MALIK, EMPLOYED FIFTY-THREE CLEANERS TO DAILY PURIFY IT WITH A BLEND OF MUSK, AMBERGRIS AND ROSEWATER. 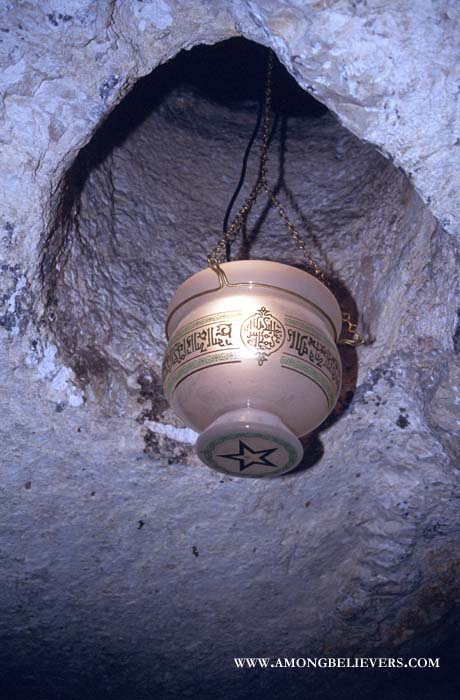 A LAMP IN THE BELLY OF THE SACRED ROCK. IN UMAYYAD TIMES, 5000 LAMPS BURNING OIL OF JASMINE ESSENCE AND TAMARISK WERE USED TO PERFUME THE BUILDING. 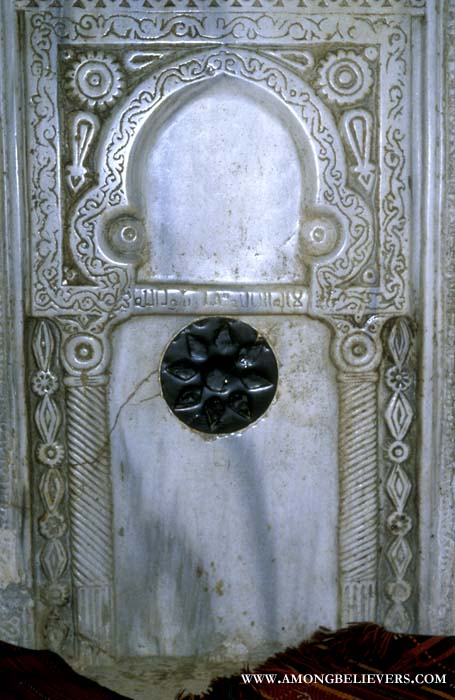 STEPS BENEATH THE ROCK LEAD DOWN TO THE ‘WELL OF SOULS’, SO-CALLED BECAUSE MUSLIMS BELIEVE THE SOULS OF THE DECEASED LINGER HERE, BEFORE THEIR OWN DEPARTURE. THE GROTTO CONTAINS ISLAM’S OLDEST PRAYER NICHE. 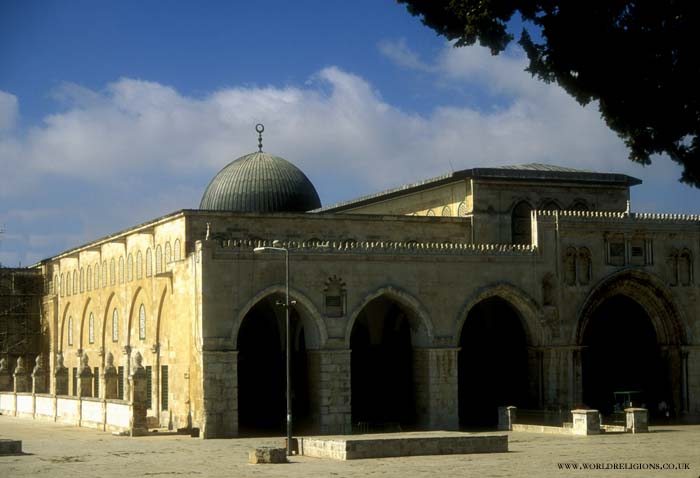 THE AL-AQSA MOSQUE BUILT IN THE EARLY 8TH CENTURY IMMORTALISES THE MI’RAJ RECORDED IN SURAH XV11 OF THE QUR’AN: Glory be to him who has made his servant go by night from the Sacred Temple to the farthest temple whose surroundings we have blessed.

MOUNTAINS RINGING WITH THE SOUND OF SINGING 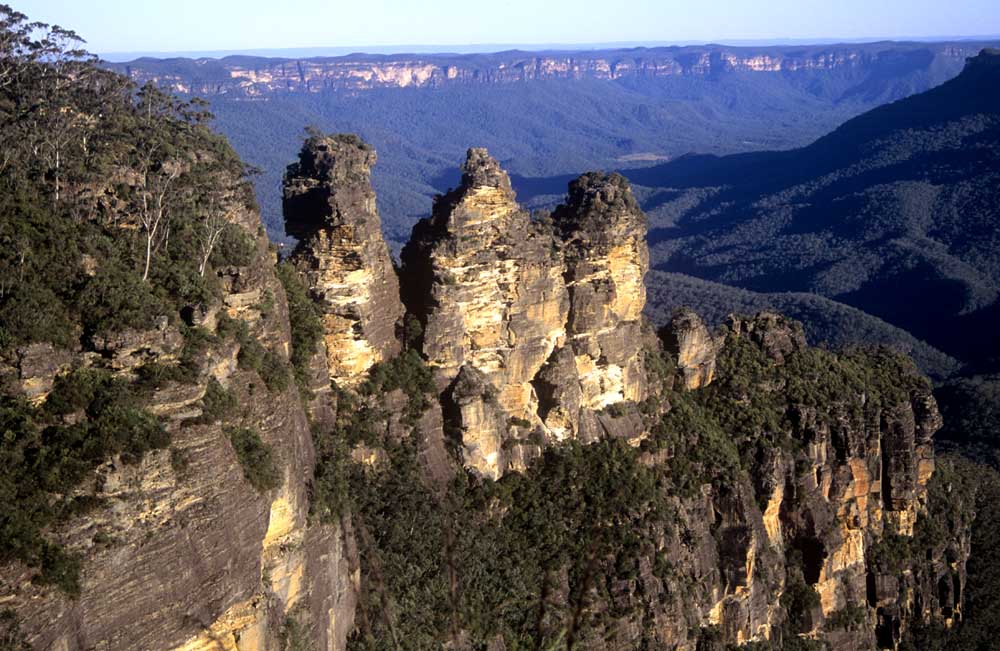 Each year over the last weekend of August, the small New South Wales Blue Mountains village of Blackheath hosts Australia’s biggest choir festival. Appearing in August 2016 were no less than 56 choirs performing all manner of music from classical and folk through pop, world, jazz, cabaret to gospel. Two outstanding choirs to perform on the final day were the Andalus/Arabic choir and Sydney’s Jewish Choral Society. 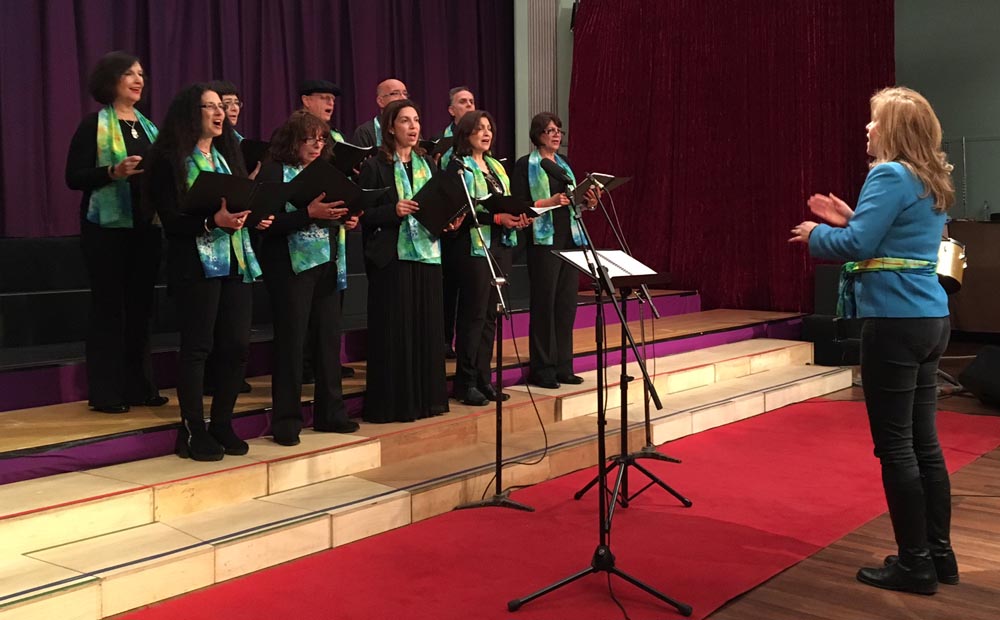 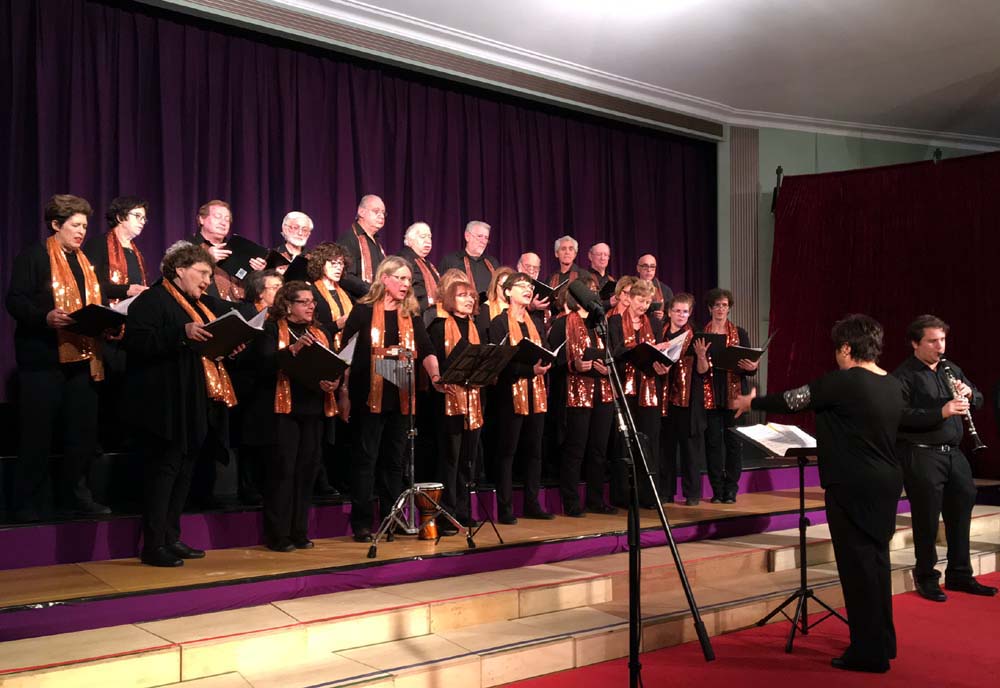 Blackheath and nearby towns of Katoomba and Medlow Bath had plenty of accommodation for the thousands of visitors who came by road and rail from Sydney (115 kms). Most took advantage to also visit the surroundings of the spectacular Blue Mountains, a listed World Heritage site. 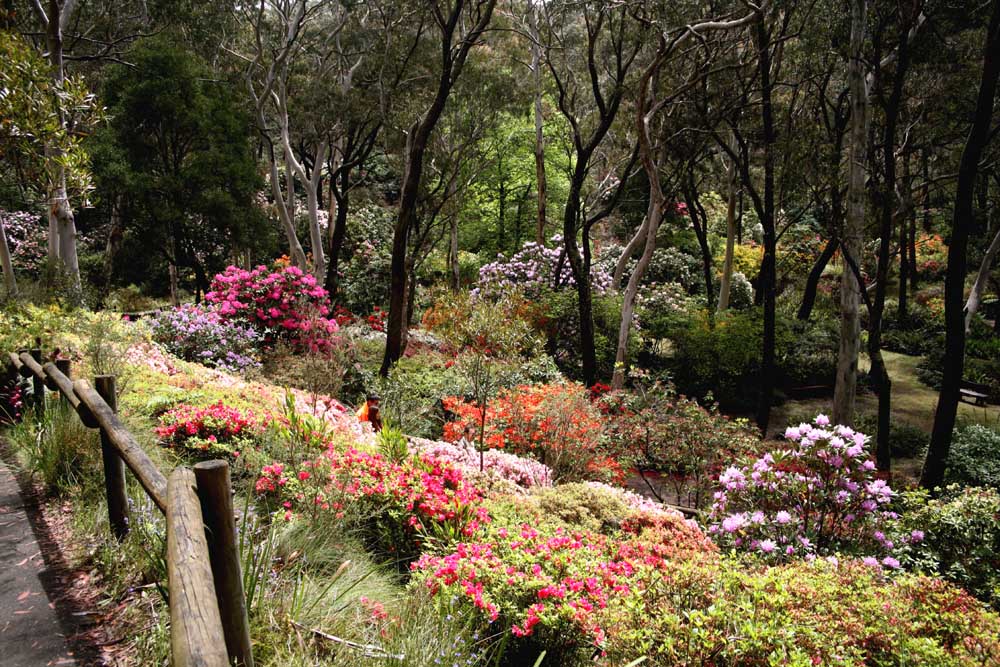 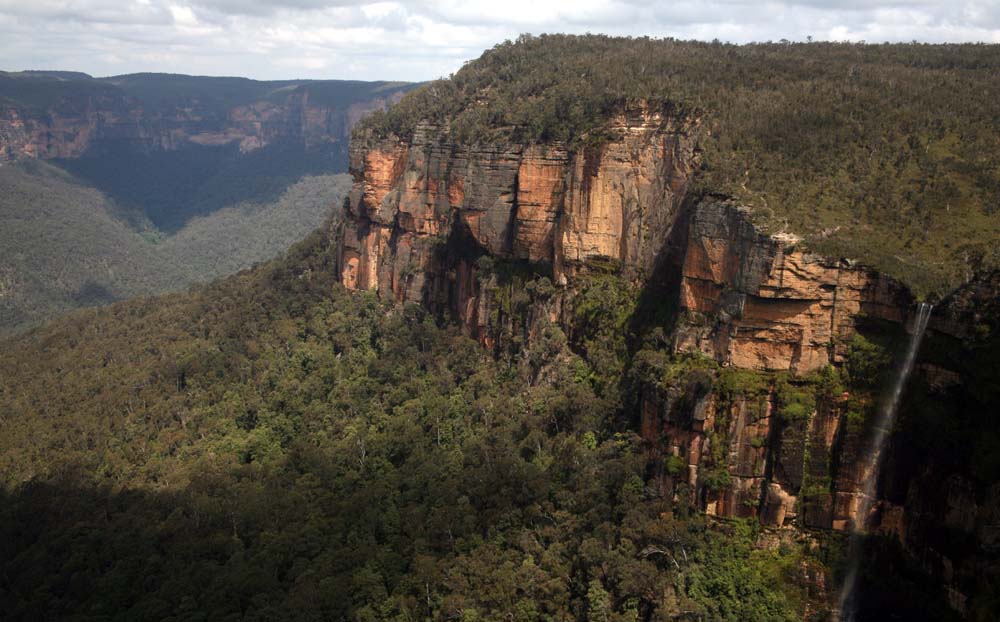 The Lebanese-Australian designer Aheda Zanetti must be laughing all the way to her bank at the free publicity generated by the furore in France over her all-in-one burkini. 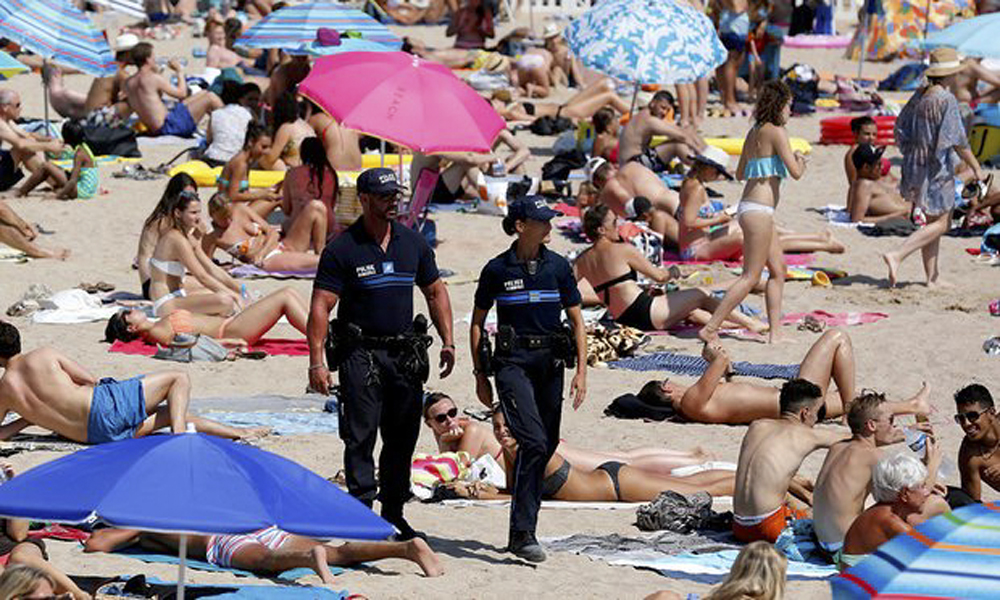 So the act of gendarmes requiring  a Muslim woman peel off on a Riviera beach has several precedents. Except in the intervening decades, the reasoning has become more sinister.

Wearing a burkini is an act of defiance in a secular society said the French High Court, before quickly overturning the ban in August. 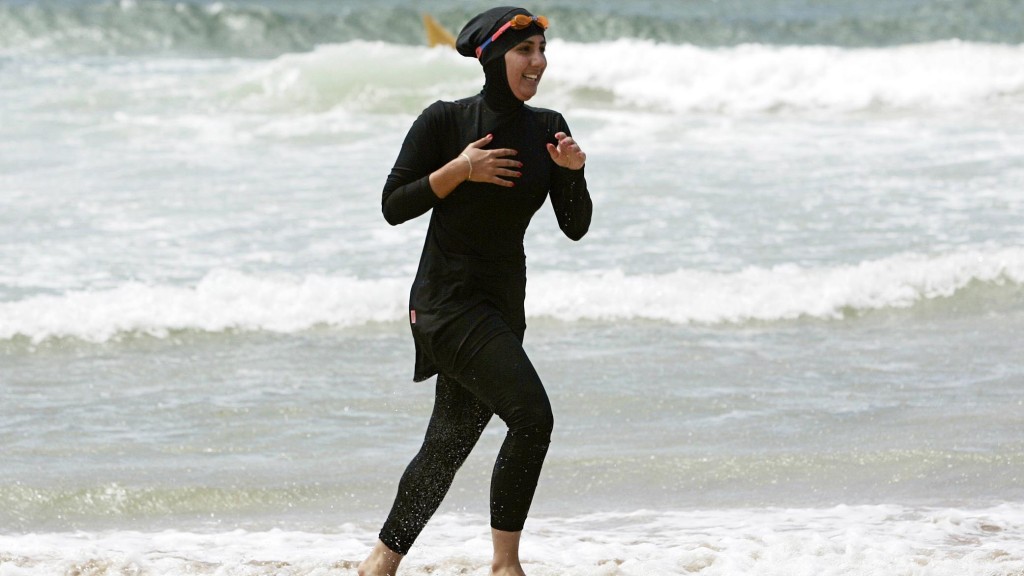 Whether the frog-like garment is a religious statement, or simply Muslim men exercising control over a woman is a moot question. Visually if you don’t cover up, you’re a slut. 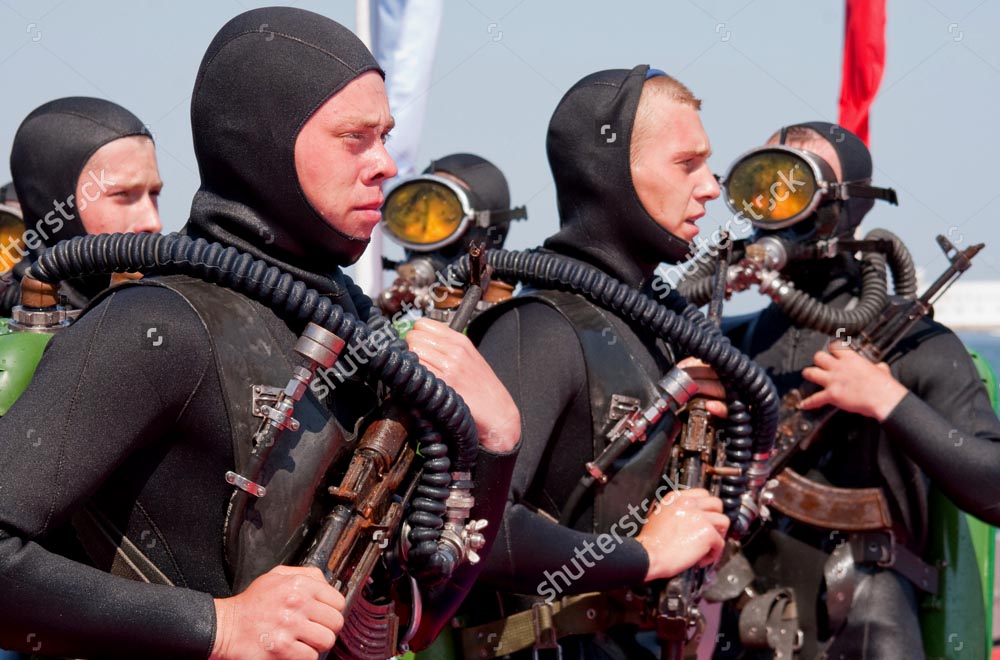 If the latter, it is time Muslim women stood up to this bullying since not only is the burkini ugly, it must be damned unpleasant when grains of sand creep inside. 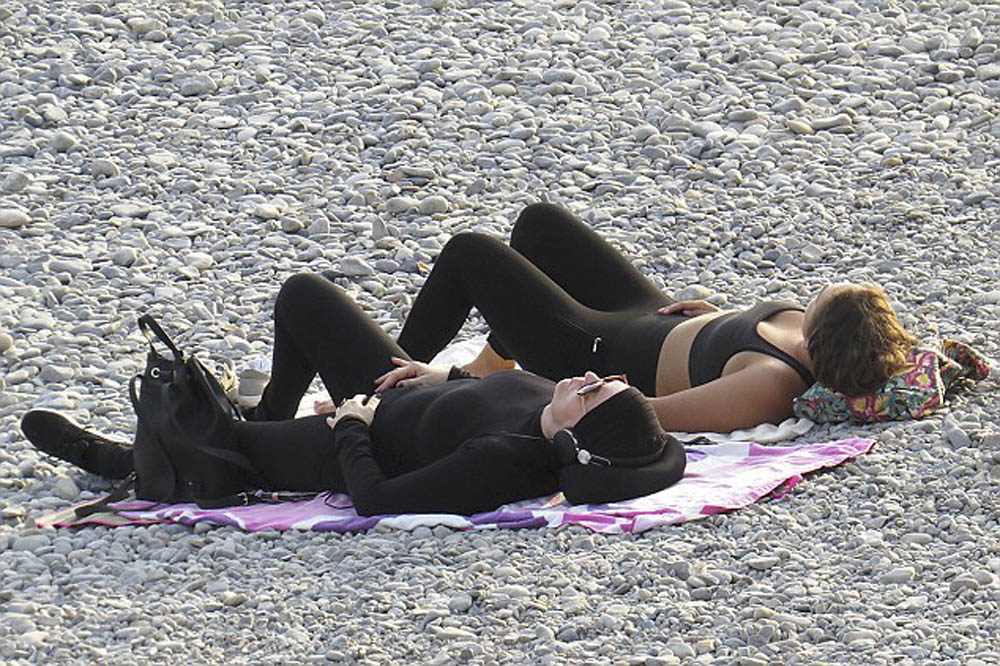 In a democracy, everyone –  men as well as women – has the right to wear their clothing of choice. 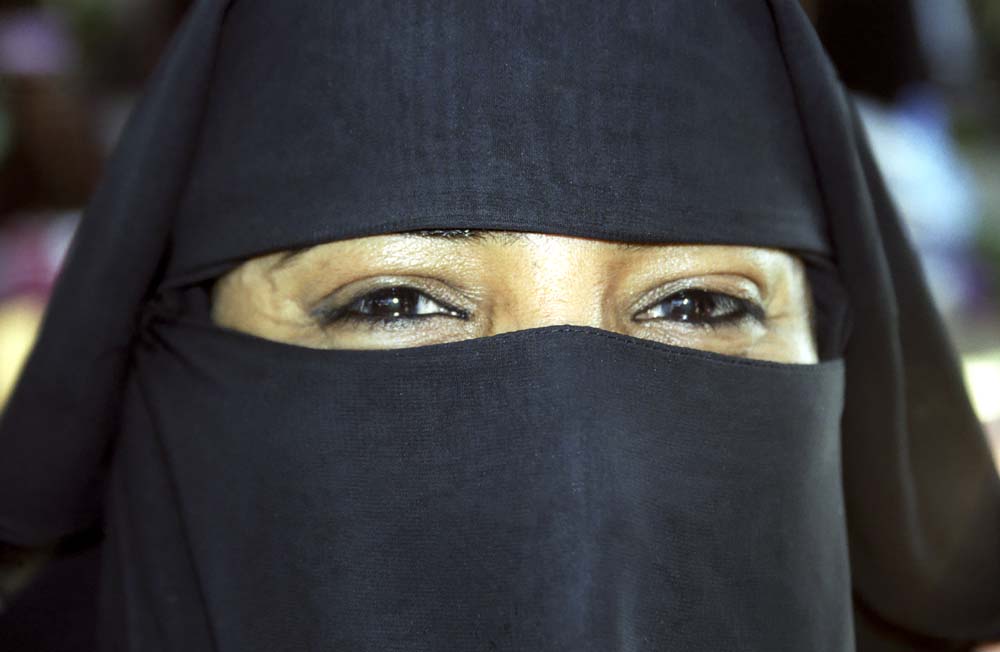 On the other hand, it is true to say that the niqab worn by increasing numbers of Muslim women is offensive in western society where people feel uncomfortable communicating with a faceless person.

So I say ban the niqab in public places, but allow the burkini to swim in peace. 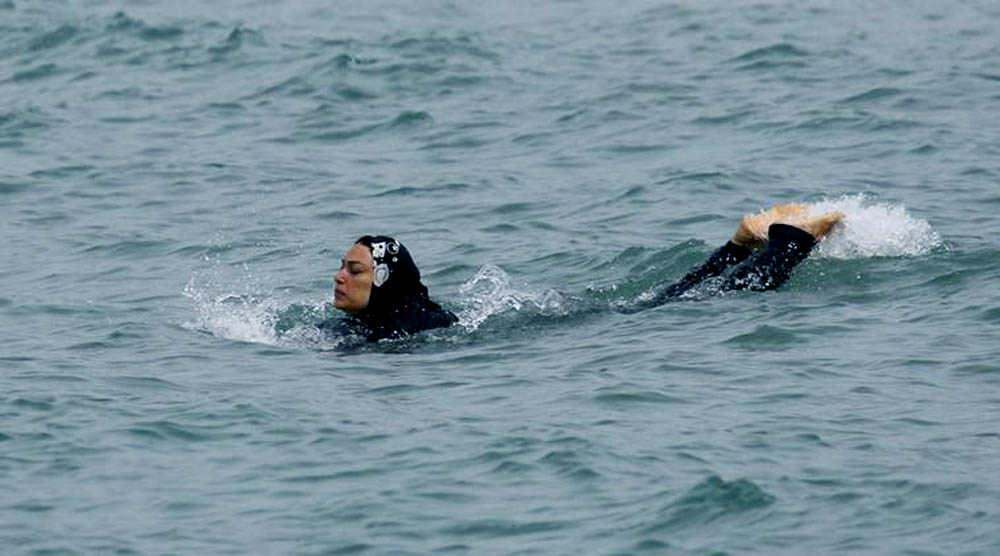 Just imagine the number of women who would be subject to “honor killings” were this heinous custom in Pakistani society practised in the West. Think Kim Kardashian and Miley Cyrus plus countless other wannabees posting on Facebook and appearing in Reality TV shows.

Pakistani celebrity star Qandeel Baloch was murdered by her brother for behavior considered inappropriate by local standards. Family honour must be protected in Pakistan even if it means killing a woman deemed to have stepped out of line.

The “honor killing” of this young, free-spirited girl is tragic.And the men who rushed to view her  pictures on Instagram, and who are now applauding her murderer, are nothing less than depraved hypocrites.

Cases of women being killed for ‘dishonouring’ their family are common in Pakistan with Human Rights organisations reporting more than 500 deaths a year.

A law imposing capital punishment on those who enact this medieval custom is long overdue. Prison is too good for a brother who strangles his sister, or a husband who stones his wife to death as one did on the steps of the Lahore High Court and which just  about says it all…

Misogyny must be stamped out in Pakistan. Until such a law is enacted, the government is just as responsible for these crimes as the perpetrator himself. 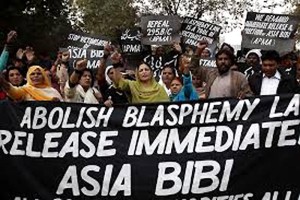 In 2009, a poor Christian farm worker called Aasiya Noreen, now widely known as Asia Bibi, was harvesting berries with a group of Muslims in the Punjab province of Pakistan.

Asked to fetch water from a well in the field, she took a sip from the cup lying next it.

Told it was unclean for a Christian to drink from the same cup as a Muslim, Noreen allegedly responded: “I believe in Jesus Christ, who died on the cross for our sins. What did the Prophet ever do to save mankind?”

On learning she had insulted the Prophet, a mob attacked Asia Bibi’s home and beat her and her husband. A police investigation followed and she was jailed under Section 295 C of the Pakistan Penal Code.

In court, Asia Bibi denied she had committed blasphemy, but in November 2010, after twelve months imprisonment, a judge in the court of her home town, Shikhupura, sentenced her to death by hanging.

But it gets worse.

On 4 January 2011, Salman Taseer, the Governor of the Punjab, a staunch supporter of Asia Bibi, was assassinated by one of his security team in Islamabad. Two months later, Shahbaz Bhatti, Pakistan’s Minority Affairs minister, the only Christian in  parliament, was killed by gunmen, also in Islamabad. And tragically, Taseer’s 28 year old son was kidnapped that August and has not been seen since.

Asia Bibi’s appeal for clemency continued to be postponed until October 2014, when the Lahore High Court upheld the death sentence.

Following a sixth appeal by her attorney, in November 2015, the sentence was suspended and the court announced it will hear the appeal on 26 March 2016.

Until then, Asia Bibi remains in prison in Multan, an ultra-conservative town in the western Punjab. 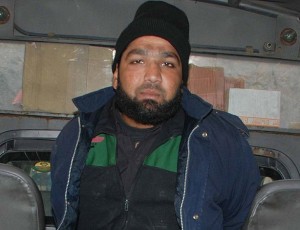 Apart from the occasional lewd act by some exuberant male marchers, the Sydney Mardi Gras which takes place in March, is great fun for everyone.

But it wasn’t always so.

When gay people attempted to hold the first Mardi Gras event in 1978, police made 53 arrests and the Sydney Morning Herald published the names of known participants.

Nearly 40 years on, the paper has apologised for this unspeakable violation of personal privacy.

And on 25th February, an official apology was made to the LGBT community in Sydney by the New South Wales State Parliament.

Again, not before time.

This said,  the Australian Federal government still refuses to legalise same-sex marriage, an extraordinary situation when you consider that Catholic countries such as Argentina, Spain and Ireland who by papal decree forbid abortion, are among the current total of  21 nations to recognise same-sex marriage  ie. the right to love your chosen partner and to have the same legal rights as heterosexual couples.

Australia is ‘dragging the chain’.

Never has this expression dating from early convict days been more apt. 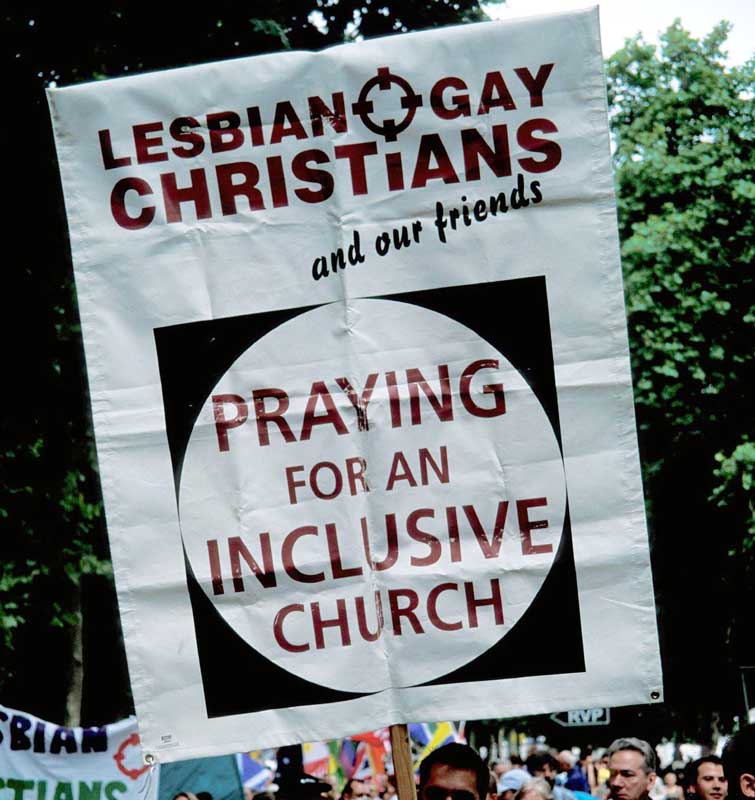